A Pyramid on Everest, Caught in the Balance

2022 Wall Scholar, Pasang Yangjee Sherpa was recently interviewed by Columbia University Climate School’s Glacier Hub blog, where she shared her thoughts on the Pyramid International Lab and Observatory, a decades-old atmospheric research facility that has become a kind of place marker for communities in Nepal’s Khumbu Valley. Sherpa included some of the Pyramid’s history in her PhD dissertation in 2012.

Constructed in 1990 as a partnership with Italy’s National Research Council and the Nepal Academy of Science and Technology, the Pyramid — also known as EV-K2-CNR — has captured local weather data for decades. In addition, it served as a hub for air pollution monitoring as well as a base from which to conduct biodiversity research and conservation efforts, among other long-term projects.

Despite the station’s placement on the mountain, Sherpa notes that local residents were not involved in its development or siting; the first materials arrived on the mountain with little to no Indigenous input, sidelining potential community suggestions or support from the start. Still, she says that the Pyramid was once a source of livelihood, and propelled the few local people employed by the station to prominence in the area.

You can read the interview in its entirety on the Glacier Hub blog. 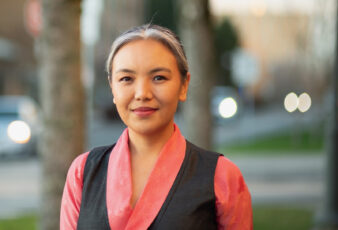