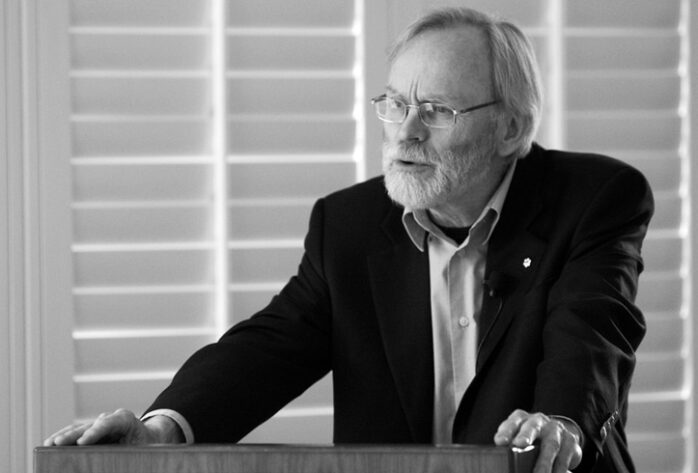 From his childhood on a farm in southern Ontario, David Fraser has maintained a fascination with animals throughout his 44-year research career. With a degree in psychology (Toronto) and a PhD in zoology (Glasgow), Prof. Fraser did research on the welfare of farm animals (Edinburgh School of Agriculture, 1971-1975) and on the behaviour and management of moose (Ontario Ministry of Natural Resources, 1975-1981) before developing a research team on farm animal welfare and behaviour at the Central Experimental Farm in Ottawa (1981-1997). He joined UBC in 1997 as NSERC Industrial Research Chair in Animal Welfare.

Development of Humane Wildlife Control Accreditation Program
Principal Investigator: Dr. David Fraser, Faculty of Land and Food Systems, UBC
Partner(s): Dr. Sara Dubois, Chief Scientific Officer, BC SPCA
British Columbia is known internationally for its diverse wildlife and landscapes, but human-wildlife conflict often arises over concerns for disease transmission, public and pet safety, and nuisance activities. World-wide, vertebrate pest control – the active removal of undesirable wild animals – is one of the major causes of intentional killing by humans. The potential for animal suffering is high, but there are no established scientific criteria or consensus on what methods should be regarded as humane for use in Canada. Further, minimum legal standards vary by jurisdiction and there is typically little enforcement to ensure that humane methods are used. One consequence is frequent conflict between the animal protection movement and others including conservationists. An international collaboration will be formed to establish criteria, scientific evidence, and expert opinion leading to science-based guidelines on humane pest control, initially for an accreditation program in BC, but with a view to providing global leadership.  Results of the Expert Forum on Wildlife Control were recently published in the journal Conservation Biology.  See news release (February 14, 2017).