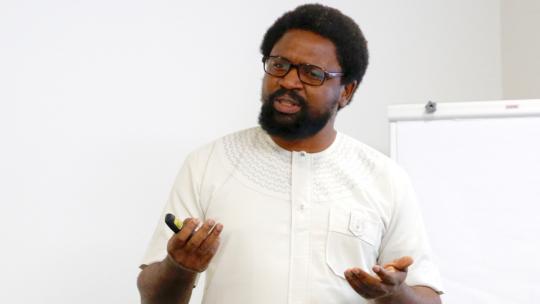 Uchenna Okeja is an Associate Professor in the Department of Philosophy at Rhodes University, South Africa, and Fellow at the Stellenbosch Institute for Advanced Study (STIAS). He is also the Director of the Emengeni Institute for Comparative Global Studies in Worcester, MA.  Prof. Okeja received his Ph.D. from Goethe University, Frankfurt in 2011. He has held visiting positions at a number of universities, including Harvard University, University of Chicago, Justitia Amplificata Centre for Advanced Studies at Goethe University Frankfurt, and Forschungskolleg Humanwissenschaften Bad Homburg.

His research interests are in Critical Theory, African philosophy, and Moral and Political Philosophy.  His research in African political philosophy aims to make political ideas and values of traditional Africa relevant for modern times, focusing on two conceptual metaphors for the public sphere, namely, palaver and consensus.  He is the editor of ‘African Philosophy and Global Justice – Critical Essays’ published in September 2020 by Routledge.