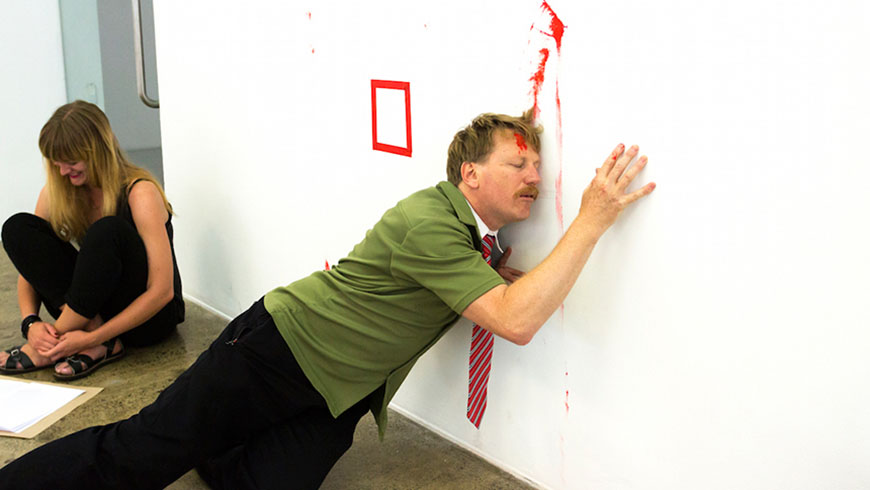 To refuse/To wait/To sleep and M&A bring together work by Goldin+Senneby, Melanie Gilligan, Gabrielle Hill, Richard Ibghy & Marilou Lemmens, Marianne Nicolson and Raqs Media Collective to investigate belief and prediction in economic models, precarious labour and illicit and marginalized markets. Speculative and experimental, their work tests models, forecasts futures and examines histories of exchange and the limits of productivity. In the context of knowledge-based economies, student debt and the outsourcing of intellectual labour, the exhibition aims to draw forth dialogues about how we imagine individual and collective futures in the “new normal.”

This symposium is presented in conjunction with a free exhibition of all the works being discussed on to April 9 at the Morris and Helen Belkin Art Gallery.

The symposium is free and open to the public, but space is limited and registration is required: rsvp.belkin@ubc.ca

Gilligan’s The Common Sense takes the form of a science fiction mini-series looking at how minds, bodies and interpersonal relations are shaped by technological advancements within capitalism. This experimental narrative drama tells a story that revolves around a future technology that allows one to directly experience another person’s bodily sensations and affect. In Waste Lands, Hill uses surplus materials from illicit economies, such as the bright plastic insulation stripped from copper wire, gleaned as she walked the False Creek Flats in Vancouver. Her work questions how ideas of private property, trespassing and Indigenous land rights shape urban space—and our experience of it—in ways that counteract dominant narratives of the city as a settled and cohesive whole. Ibghy & Lemmens’ The Prophets is a massive collection of delicate hand-made models that represent concrete data and mental abstractions, law-curves and fact-curves, positions drawn in logical time and in historical time, as well as a number of other forms and procedures common to economic analyses. Together the sculptures made from everyday materials constitute a diagrammatology of economic thought. Raqs Media Collective’s video installation Re-Run features a crowd desperate to withdraw their money in anticipation of an imminent collapse of the value of currency in the lead up to the takeover of Shanghai by the People’s Liberation Army. Based on Henri Cartier-Bresson’s photograph from 1948, the video loop resonates with current geopolitical conditions. In a newly commissioned banner installed at height on the Belkin Gallery exterior, Nicolson reworks the British Columbia provincial flag, repositioning and inverting the Union Jack below a setting/rising sun recreated with a Pacific Northwest Coast Indigenous aesthetic, referencing the flag’s original orientation (1895-1906). While the original version of the flag with the sun atop the Union Jack suggested a cooperative situation and mutually beneficial alliances between the crown and Indigenous nations, the 1906 reversal symbolically revealed a relationship of oppression, theft and genocide. By righting the symbols of the flag back to their original relationship, Nicolson’s banner symbolizes the hope for and assertion of Indigenous rights over the land, which today remain largely unresolved. Concurrent to the exhibition, Nicolson’s paintings Tunics of the Changing Tide will be presented at the UBC Walter C. Koerner Library.

In M&A, Goldin+Senneby collaborated with an investment banker and a computer scientist to develop a complex algorithmic trading model that locates indicators of pending mergers and acquisitions (M&A). The production budget for the project is invested in the stock market using this algorithm. If and when the invested money runs out, the actor contracted to perform ceases his endless rehearsal of the script. Goldin+Senneby combine the speculative nature of both theatre and finance and the precarious labour conditions that characterize late capitalism. M&A is a durational performance in the Print Gallery of the Belkin, beginning January 13 and running until the trading budget runs out.

Goldin+Senneby’s residency at UBC is supported by the Peter Wall Institute for Advanced Studies.