What else can you do, say, remember, count, write, or create after everything has been said and done? How many more times should critical and creative work recite episodes of colonial and racial violence? How many times do we need to recognize that an injustice has occurred? In how many ways can one articulate a cry for justice? How many dead bodies will we have to accumulate until there is enough evidence? How many Black people have been killed by police in the United States, Canada, and Brazil during the coronavirus pandemic?

In the United States, Breonna Taylor was killed in her sleep while George Floyd was lynched in public view, police suffocating him. Meanwhile, with more than 100,000 deaths due to COVID-19 in the United States, one in four Black adults say they personally know someone who has been hospitalized or died due to having the coronavirus.

What counts? What do you take into account? How many times do we have to ask the same question to know impunity is the answer?

My work deals precisely with these questions and seeks to move beyond the limitations of historical materialist and poststructuralist critical tools. In particular their inability to articulate a coherent and effective description of racial subjugation, not only, although mainly, when it operates in conjunction with other social categories (gender, sexuality, physical and neurodiversity, and immigrant status). My claim is that those who do not count are those whose work and land currently constitute – as in flesh and blood of  – global capitalism.

In addition to academic writings, I also explore these questions in art-related texts and collaborations with Valentina Desideri via Poethical Readings (a relational practice that reads for political and ethical questions) and Arjuna Neuman, who I partner with to create experimental films. These explorations do not seek to appropriate or incorporate creative work; nor are they designed to expand criticality into it. For one thing, the practices and structures of the global contemporary art market encompass the same characteristics pointed out in my commentary on historical materialism and criticality. What attracts me is what makes aesthetic practices and, in return, what they make possible.

The artwork gives itself to the viewer, or the public, only partially. It is opaque. Even if the artist expresses their intention. There is a gap between it and what leads to the accomplishment of the work, what it eventually becomes, and what happens to work once it is in the world. In the work I developed as a Wall Scholar this year I try to inhabit this obscurity by mobilizing the radical, disturbing potential of the figure of the Black female body, not only – but mainly – in terms of how it confronts/expands colonial/racial/cis-heteropatriarchal violence.

Denise Ferreira da Silva is a professor and the director of the Social Justice Institute at UBC, as well as an adjunct professor of fine arts at Monash University, Melbourne, Australia, and a visiting professor of law at Birkbeck University of London. 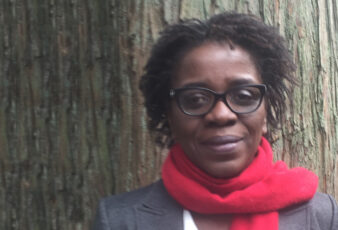