Dr. Alain Berthoz was a Peter Wall Distinguished Visiting Professor September 1-30, 2009. An internationally-renowned neurophysiologist and an expert on perception and movement, Dr. Berthoz holds the Chair in Physiology of Perception and Action at the Collège de France in Paris, and is Director of the Laboratory of Physiology of Perception and Action. Through brain imaging, recording movements, and the use of virtual reality, Dr. Berthoz and his research team study the neural basis of four major types of cognitive-motor functions: eye movements, generation of locomotion trajectories, strategies for cognitive spatial memory, and perception and expression of emotions and actions of others.

Dr. Berthoz returned to the Peter Wall Institute in September 2011. His return visit was co-sponsored by the UBC Brain Research Centre. 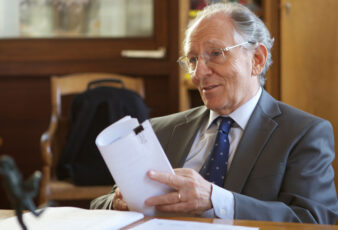