Ali Velshi: The business of truth 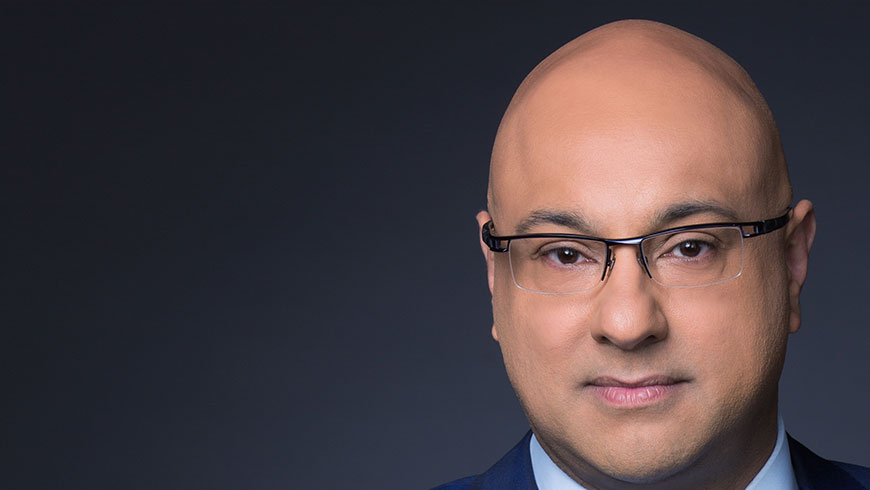 On May 16, Ali Velshi will deliver the Spring 2018 Wall Exchange at The Vogue Theatre in downtown Vancouver.

There’s a line Ali Velshi likes to use in public appearances and even includes in his short Twitter bio: “I actually AM a Kenyan-born Muslim.” The quip is clearly a reference to Donald Trump’s long-running spurious claim that President Barack Obama is secretly a Muslim and was born in Africa.

It’s a sure-fire laugh line, but it brought the MSNBC host some trouble during a recent on-air exchange with the lawyer for Roy Moore, the Alabama Republican who was running for U.S. Senate and was accused of sexual misconduct with minors.

After Velshi and his co-host pressed Trenton Garmon for answers to why his client seemed to pursue teen-aged girls many decades younger than him, the guest steered the conversation in another direction. “That’s a good question. Culturally speaking, obviously there’s differences,” Garmon said. “I looked up Ali’s background there and wow, that’s awesome that you have got such a diverse background. It’s really cool to read through that.”

“I don’t know where you’re going with this, Trenton,” Velshi said, as he and his co-anchor pointed out that Velshi grew up in Canada. After the segment ended, Velshi noted while shaking his head: “There’s nothing cultural about my background that helped me to understand what that conversation was about.”

It was the kind of exchange viewers have come to expect from Velshi, who has been a fixture on American cable news since 2001, when he rode his motorcycle from Toronto to New York to work at CNN. While he joined the network as a business reporter and anchor, it was the perennial rite of passage of newsmen—coverage of hurricanes—that brought Velshi widespread attention. He was all over New Orleans during Katrina, and was on air day and night throughout the 2008 storms Gustav and Ike.

But it was the Great Recession that turned Ali Velshi into a household name. As the economy was collapsing in 2008, viewers were clamoring for some guidance, and Velshi’s calm, thoughtful analysis of the crisis turned him into an A-list broadcast star. The comedian Jon Stewart invited Velshi onto The Daily Show to discuss the economic concerns at the time. “Who is that hairless prophet of doom and how can we appease his anger, please,” Stewart joked about Velshi, who has sported a clean-shaven head since he first appeared on camera two decades ago. “If we give you our hair, will you give us back our money?”

Learning the business of news 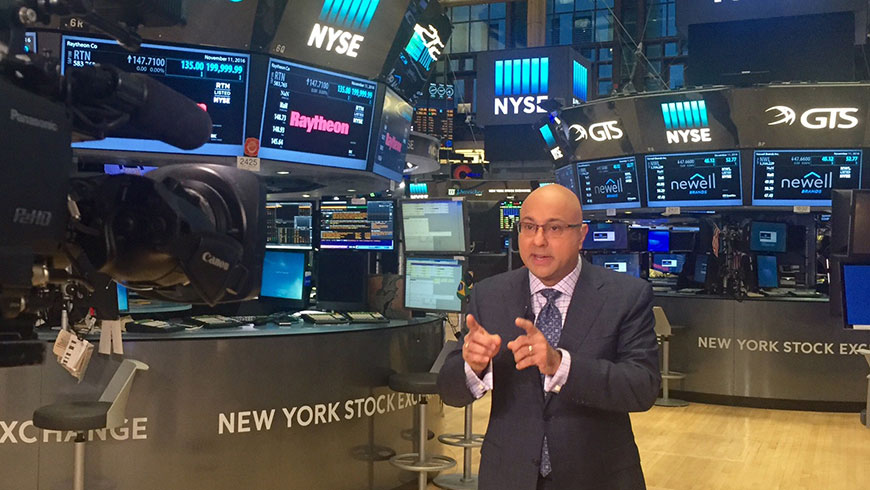 Velshi learned about business and economics not at university, but at home, watching his father Murad as he built a successful business, and then went on to serve as a Liberal MPP for the riding of Don Mills in Toronto. Velshi’s parents, both of Indian heritage, were born in South Africa, to families steeped in social justice. His great grandfather was a friend of Gandhi, and family members were prominent in the anti-apartheid movement. In 1960, Velshi’s parents were forced to sell their family bakery and flee to Nairobi, Kenya. Shortly after Velshi was born there, the family decided to relocate to Canada.

At first, Velshi toyed with politics. He had been president of his high school’s student council, and in 1992 he was thrown out of a political rally while protesting against the Reform Party and its leader Preston Manning. Velshi landed a prestigious fellowship at the U.S. Congress from the American Political Science Association, and worked with Lee Hamilton, a prominent Democratic Congressman from Indiana.

It was in the newsroom, though, where Velshi seemed to feel most at home. He interned at the Paris bureau of 60 Minutes, as well as on the CNN program Crossfire. And he worked as a news writer and reporter at some of the top news broadcasts in Toronto, including the local CTV flagship station CFTO, as well CablePulse 24 and City TV.

In 2001, he followed in the footsteps of Canadian TV news greats like Peter Jennings, Morley Safer, Robert MacNeil and Kevin Newman—and made his way to New York. Then, after more than a decade of covering some of the biggest stories for the cable news giant CNN, in 2013 Velshi was offered an opportunity that was hard to pass up. Al Jazeera, the Qatar-funded global news network, was starting Al Jazeera America, with the goal of reaching the U.S. heartland with thoughtful, globally-focused news. Velshi was their first on-air hire, and he was given a prime-time slot for a magazine-style program.

During his time at CNN and at Al Jazeera America, Velshi did not hide his opinions. He defended the Park51 project, a mosque and Islamic centre near Ground Zero in lower Manhattan, and he criticized Rep. Peter King’s Congressional hearings on Islamic radicalization, calling it blatantly racist and the representative “naive.” This brand of bold journalism drew the attention of NBC, whose cable channel MSNBC is known for its left-leaning coverage, and has promoted outspoken hosts like Chris Matthews, Keith Olbermann and Rachel Maddow. In 2016, he was hired to host the daily program MSNBC Live and co-host the morning show Velshi & Ruhle.

Since the presidential election of Donald Trump, Velshi’s star has risen even higher. Many of his on-air exchanges with Trump surrogates have become viral video fodder.

When President Trump falsely claimed that the U.S. has a trade deficit with Canada, Velshi was one of the first to jump in, pointing out that, “The United States, most definitely—this is just simple math—has a trade surplus with Canada.” In case any skeptics were confused, he went on to clarify: “Let me put it a different way. Canada buys more things from the United States than the United States buys from Canada—to the tune of $12.5 billion.”

During an exchange with Republican Congressman Lee Zeldin about the North Korean missile threat, the guest avoided discussing the Trump Administration, focusing instead on the roles of Bill Clinton and Barack Obama. “This is not a political game,” Velshi shot back. “This is about war. Can we get answers?”

When Rep. Morgan Griffith came on Velshi’s show to discuss the estate tax, Velshi pointed out that cutting this tax will save wealthy American billions, even though Trump Administration officials insist it will not help the rich. “Your constituents are okay with the fact that that’s a lie?” Velshi asked. And when Rep. Jim Renacci—an accountant who serves as a Republican in Congress and is running for the Senate—came on the air to claim the corporate tax rate in the U.S. is the world’s highest, at 35 percent, Velshi put up a chart showing the effective rate is less than 19 percent.

He even corrected one of his journalist colleagues, Carrie Sheffield, during a discussion about immigration reform, pointing out that, “Canada lets refugees in at a much higher rate than America does, without any regard to their education, so Carrie, my excellent friend Carrie, never bring up Canada in an immigration conversation.”

Perhaps Velshi’s finest recent moment, though, came during a discussion with Trump adviser Brad Thomas. The guest repeatedly credited the current administration for job growth, and when challenged, he attacked Velshi and his co-host’s knowledge of economics.

“Brad, hold on a second, hold on. You’re talking to two financial journalists,” Velshi said. “This market started going up on March 9, 2009, and if you have a ruler, it’s a pretty-much straight line from there to now. So there is nothing Donald Trump has done to cause the market to be like this. You guys keep peddling this myth that Donald Trump is responsible for this market.”

“Look, it’s just very complicated, and I get that it’s not your background,“ Thomas said.

“It’s far more our background than it is yours,” Velshi said, as his co-host pointed out she worked in investment banking for 14 years.

Velshi was exasperated, as if a year of these kinds of Trump Era-conversations were already getting to him. “You can’t just lie on TV. I don’t know if your people told you who you were coming on TV with, but you can’t just lie about the economy to us.”