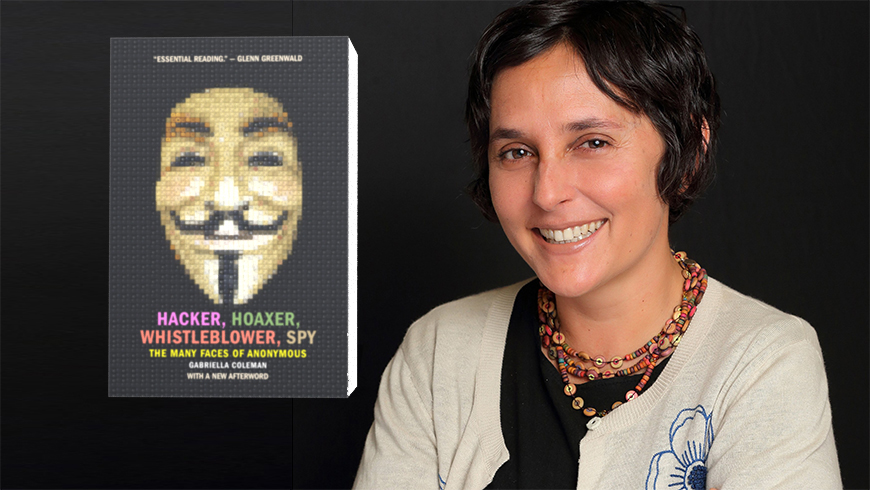 The Peter Wall Institute is presenting Dr. Gabriella Coleman in free a Wall Exchange lecture at The Vogue Theatre in Vancouver on October 20th.

Who is behind the online actions of ‘Anonymous’? How do they organize? And why do they do what they do? Little is known beyond the fact that the loosely-organized band of digital rebels has waged social justice campaigns through a variety of tactics such as crashing websites as well as hacking and leaking politically sensitive information. Yet this is no traditional social movement; there is no guiding ideology. And an undercurrent of whimsy reduces guessing Anonymous’ next move to a stumble in the dark.

Still, the principle that anyone can be Anonymous, along with its hallmark hacktivist tactics and Guy Fawkes mask icon, offer some definition to the group. ­­

Dr. Gabriella Coleman began researching Anonymous in early 2008, when the group played pranks on the Church of Scientology after it threatened legal action against certain organizations for publishing information it wanted kept quiet. She followed them through 2010, when the pranking shifted toward the more serious pursuit of website disruptions against companies that aided the American government’s campaign against WikiLeaks founder, Julian Assange, who had published secret documents. Her study of Anonymous continued through the Occupy Wall Street movement as well as the Arab Spring, persisting to its present day struggles against abuse of authority by police, rape culture and the arcane practices of private security companies.

Wall Papers caught up with Dr. Coleman, author of Hacker, Hoaxer, Whistleblower, Spy: The Many Faces of Anonymous, for insight on these hacktivists.

Wall Papers: Who is Anonymous?

Gabriella Coleman: That’s difficult to answer because the activists are cloaked; they are, after all, anonymous. But when many people got arrested after certain campaigns, I got to meet a number of the hackers behind the mask and Anonymous is more diverse than you would think: all the hackers, which are a minority of the group, are male but they hail from different class and ethnic backgrounds, including some from the Middle East and Latin America. The great majority of Anonymous participants are not hackers, however, and here the diversity becomes more pronounced: I’ve met journalists, law students, janitors, Buddhists, homeless participants and wealthy engineers, and so on. There are quite a few women and also participants who are queer as well. It is likely the anonymous conditions that accentuate the diversity of Anonymous.

Wall Papers: What drew you to Anonymous?

G.C.: Their transformation from Internet trolls and prankster to hacktivists. Trolling is cynical and nihilistic. That activist wings have sprung up from fierce pranking is kind of amazing. I was also intrigued by the very strong ethic in Anonymous that underscores the importance of not seeking fame. I also believe that the current explosion of hacker politics, including whistleblowers owes a lot to a climate of civil disobedience that Anonymous helped promote.

G.C.: They do at times. Participants themselves will say “Anonymous is not unanimous”, signaling disagreement over tactics. Not everyone agrees with what people do using the name but you can’t stop people from using it. Its name is hard to police. Negative consequences do occur at times: Anonymous has revealed details of people not being targeted, such as the family of a police officer who was outed for a perceived abuse of power.

Wall Papers: Do innocent people need to worry about Anonymous breaking into their computers?

G.C.: I don’t think so. Anonymous may be unpredictable but they don’t randomly attack people, especially for financial gain. A malicious hack likely would be denounced by Anonymous.

Wall Papers: What has been Anonymous’ greatest success?

G.C.: The Scientology campaign because it allows people who want to speak out against the organization to do so without fear of legal retribution. Other important Anonymous campaigns include Occupy Wall Street, the Arab Spring and Spain’s 15-M anti-austerity movement. Of course, movements happened on the streets; Anonymous’ role was one of technical or propaganda support. Finally, they helped popularize the public disclosure hack, which will be the topic of my Wall Lecture.

Wall Papers: With the release of Oliver Stone’s movie, “Snowden”, is Anonymous looking to make a splash now that the public is again talking about acquisition of sensitive information?

G.C.: In the United States, hacking and leaking activity has slowed down since 2013 but continues in many parts of the world such as Italy and Latin America. 2010-2013 was truly a watershed period for the publication of leaks: Chelsea Manning provided American diplomatic cables to Wikileaks; Anonymous hacked into shadowy security companies and published emails and Edward Snowden topped things off with a mega leak of NSA materials. Those types of leaks will continue but they will happen more infrequently as whistleblowers and hackers take more security precautions to avoid being caught.

Wall Papers: Where will Anonymous will strike next?

G.C.: It’s impossible to forecast; its unpredictability is what makes Anonymous powerful. It depends on what catches their attention and if they are hacking, on which organizations are exploitable. The state of digital security is paramount in determining digital attack.

Join Dr. Gabriella Coleman at the Vogue Theatre on October 20 for a history of Anonymous and online leaks.