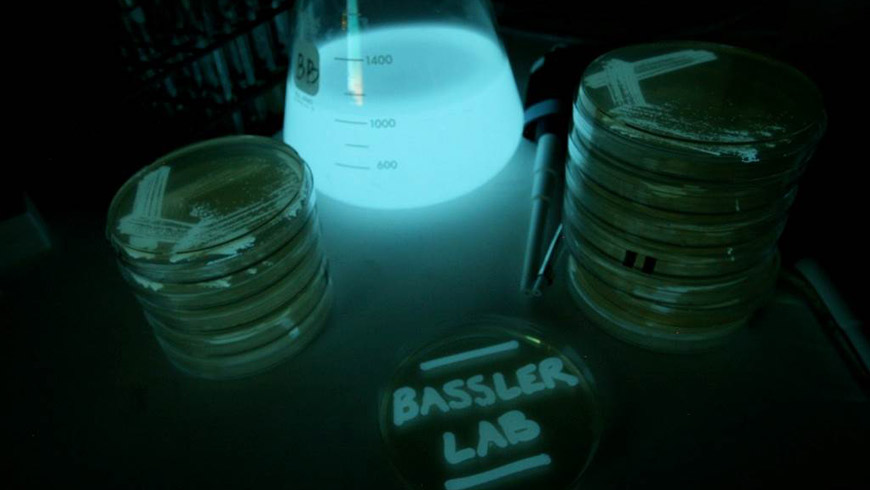 Do the bacteria that make us sick with a fever or that give us food poisoning have a sophisticated way of communicating with each other?

“At the heart of my lab’s research is the question of how bacteria get any bang for their buck. Bacteria are puny yet they are powerful,” Bassler says. “The reason they are so mighty is because they do not act as individuals, they act as collectives. They talk to each other with chemicals as the words, they count each other, and they act in groups.”

Bassler is working as an International Visiting Research Scholar with Brett Finlay, Peter Wall Distinguished Professor and a Professor in the Michael Smith Laboratory and the Departments of Biochemistry and Molecular Biology, and Microbiology and Immunology at UBC. She will be in Vancouver this spring as a speaker for the Wall Exchange to discuss how her research could be the key to revolutionizing the way the world looks at and deals with bacteria.

Bassler’s research shows that infections and illnesses are not consequences of a random collection of bacteria acting in isolation. Rather, they are precisely coordinated attacks organized by groups of bacteria.

“The process is called quorum sensing. The bacteria vote with chemical votes, the votes are counted, and the members of the bacterial community respond, in unison, to this democratic decision making process,” Bassler explains.

“What’s fun about this is that it all goes back to an obscure glow in the dark bacterium found in the ocean,” Bassler recalls.

Hastings was fascinated by how biological organisms, especially bacteria, could produce light, called bioluminescence. He noticed that when he grew the bacteria in a flask, they did not produce light when they were in low numbers. Then, all of the sudden, when the bacteria had grown to a particular cell number, they all turned on light simultaneously.

It was a literal light bulb moment for Hastings who realized that glowing was a result of coordinated bacterial behavior.

“This bioluminescence made that invisible bacterium world visible to us,” Bassler explains.

Hastings’ findings were expanded by Mike Silverman, a geneticist in California, a decade later.

Silverman worked out the mechanism underlying the communication and he decoded the genetic side of quorum sensing. At first it was thought that bacterial cell-cell communication was an anomaly of this peculiar strain of ocean bacterium.

“These scientists made seminal findings, but they were sort of ignored because the findings came from a goofy bacterium that almost no one had hear of that lived in the ocean.” Bassler states, remembering the early days of microbiology research and how she learned about Hastings and Silverman’s work.

“Silverman gave this fantastic talk in which he showed this bioluminescent bacterium and explained how they communicated to coordinate behaviour. And I was like, ‘holy shmoly’! When he showed that finding, I was a 26-year-old sitting in the audience thinking this guy is either crazy or that’s the most amazing thing I ever heard. I literally ran up to the podium and said ‘you have to let me be your post-doc’. Once I got to his lab, I started to work out that there were multiple molecules involved and ultimately that quorum-sensing is widespread in the bacterial world, not restricted to one glowing bacterial species.”

We now know that bacteria can tell which neighbouring cells are their twins, which are their distant relatives and which bacteria are their opponents based on chemical communication.

“They behave differently based on who is in the neighbourhood,” Bassler explains. “It’s a lot like how people perform social behaviours.”

“What we are trying to do now is to develop strategies that interfere with quorum sensing to make new kinds of antibiotics which the world urgently needs given that we have a global problem with antibiotic resistance,” Bassler says.

Quorum sensing allows bacteria to recognize when they have a sufficient number of neighbouring cells around so that if they launch a virulence attack, they will be successful at making an infection.

Bacteria communicate with each other when they are in large enough numbers – a process called “quorum sensing,” says Bassler.

“A goal is to make bacteria that cannot talk or cannot hear and then they cannot cause infections,” Bassler suggests.

Generating products that block infections before they reach the human body is another immediate goal for practically applying this research. Imbibing IV drip tubing or cathators with communication blocking molecules is one potential way to do that. Other possibilities include coating countertops, beds and food trays; Bassler suggests devices that are implanted in patients could be glazed with communication blocking molecules.

Some successful animal testing has been done, but so far no human trials have been performed. For now, more needs to be found out about the basic biology of bacterial communication to realize the potential for new antibiotics and medical products.

Eventually Bassler believes antibiotics will be developed that incorporate her field of research, perhaps within the next decade, if everything goes according to plan.

“I get real joy in knowing that this crazy glow in the dark bacterium that nobody cared about for decades may lead the way to the world’s next antibiotic. I think that’s an awesome science story. That’s when science is at it’s best.”

Bonnie Bassler gave the spring 2015 Wall Exchange lecture, “The Secret, Social Lives of Bacteria,” on May 26, 2015 at the Vogue Theatre in Vancouver. 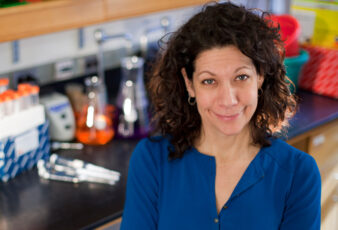