Girls and women abducted by rebel soldiers in Uganda who have returned to their communities face extreme poverty and social stigma. Communities often reject survivors and their children.  Supported by a 2017 Wall Solutions award, Dr. Erin Baines, Ms. Evelyn Amony at WAN (Women’s Advocacy Network), and Ms. Beini Ye at REDRESS (international NGO working for legal rights of victims) worked to seek reparations for survivors and their children.

In 1994, 11‐year‐old Evelyn Amony was walking home to her grandmother’s house after school when she was abducted by a group of Lord’s Resistance Army (LRA) soldiers. Evelyn’s grandmother tried to protect her, pleading with the rebels and defying their orders not to cross a line that they drew in the sand, but the soldiers took her grandchild away.

Life in the LRA was organized into “family” units. Evelyn was enslaved and assigned to the LRA leader’s family, to care for two of his children. Initially, he referred to Evelyn as his “first born,” acting as a father figure to her, but soon after she was forced to become his wife. Evelyn gave birth to the first of three children with him at the age of 14. In 2005, after 11 years in captivity, Evelyn was captured by government soldiers in a military ambush. She was taken to a rehabilitation centre in Gulu with her two surviving children—one of her daughters disappeared in the chaos of another military ambush. Shortly after returning home, she took part in peace negotiations between the Ugandan government and the LRA. In 2008, she founded the Ugandan Women’s Advocacy Network with other survivors.

The LRA waged war against the government in Uganda for over 20 years, from the mid‐1980s onward. Tens of thousands of children were abducted and forced into the ranks of the rebel army led by military and spiritual leader Joseph Kony. These children received military training and were forced to carry heavy loads of ammunition and supplies through bush and mountains. They faced constant violence from both the rebels and the Ugandan army hunting the LRA.

Many ‘children born of war’ are unable to obtain national identity documents, and most are not recognized as a particular victim group. Their voices are missing in global policy debates on peace-building and transitional justice, and the long term and inter-generational effects of their experience are unclear. As global advocates work to create new normative and legal frameworks to protect ‘children born of war’, survivors are working to improve the lives of their families and community. The Child Tracing report describes these efforts in post-conflict northern Uganda. Child tracing is the complex process of identifying the paternal identity of children born of wartime sexual violence, and seeking family unification to promote the child’s sense of identity, belonging and well-being.

Ms. Amony, Michael Otim, Justice and Reconciliation Project, and Dr. Baines travelled to the United Nations in New York in October 2018 to meet with UN officials and NGOs to support the push for a global normative framework on children born of war, and to share lessons learned from Uganda.

Ms. Amony called on UN Security Council members to address the lack of legal status and redress for children born of war, their health considerations due to war related injuries or illnesses, and to investigate the children born of war who went missing during the fighting.

The Child Tracing report was funded by a PWIAS Wall Solutions Grant and a SSHRC Partnership Grant, Conjugal Slavery in War.

Photo: Evelyn Amony and her youngest child, who was born in captivity (2005). Courtesy of Erin Baines. 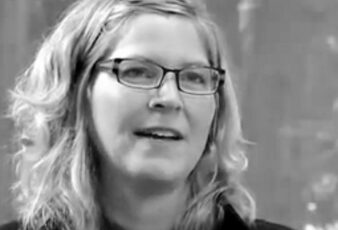