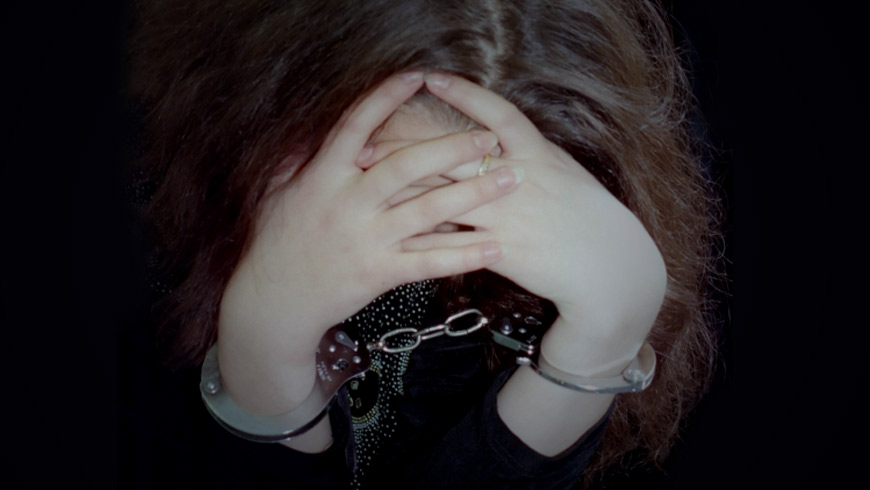 When a woman is convicted of a crime, it is not only the woman who is sentenced, but also her children who are themselves innocent and yet who suffer the ultimate punishment, maternal separation, says Samantha Sarra, Co-Principal Investigator of a Peter Wall Institute International Research Roundtable held in May 2013.

“The result is a cycle of trauma and struggle that has generational consequences that has left the health and well-being of marginalized women and their children in a state of crisis,” she says.

The International Research Roundtable, Bonding Through Bars (shown above), brought together delegates from five continents to explore the health and human rights of incarcerated women and their children. The state of Canada’s prison, legal and child welfare system was at the forefront of this international dialogue aimed at initiating change towards more equitable laws, policies and programs. 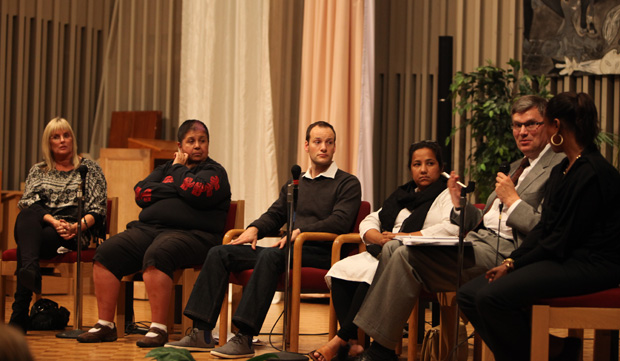 Roundtable panel on the rights and realities of the children of incarcerated mothers. From left to right: Debbie Kilroy, Sharon McIvor, Chesa Boudin, Pushpa Basnet, Geoff Cowper and Sharon Content.

“It’s extremely important to know that more than two-thirds of the women in Canadian prisons are mothers and the majority of them are the sole providers for their children who are directly impacted when they are incarcerated,” says Roundtable delegate, Kim Pate, Executive Director of the Canadian Association of Elizabeth Fry Societies.

Other countries have had more equitable approaches to justice and its relationship to parental incarceration. In 1994, South Africa offered special remission of sentences for mothers with minor children under the age of 12.

“Nelson Mandela freed all the women who were mothers,” explains Pate, “he understood the legacy of imprisoning the mothers punished not just the mother but also her children and all generations to come.”

“We’re talking about a situation rooted in women’s economic, social and political inequality. Women who are at greater risk for victimization, women who have no choices and are selling their bodies or doing whatever they can to make ends meet and essentially the criminalization of poverty,” she adds.

Dr. Susan Boyd, a Roundtable delegate and Chair of the Policy Working Group for the Canadian Drug Policy Coalition, agrees that socioeconomic factors are key to understanding maternal incarceration.

“It’s poor and radicalized women who are in prison. Aboriginal women and women in poverty are criminalized. The cards are stacked against them from the beginning and there are terrible consequences for them,” says Dr. Boyd.

“There is a terrible cost in human suffering and tax dollars in prison building rather than providing the affordable housing, adequate income assistance and access to education that would better support families and children. Stop blaming them for being poor mothers. We need to look at our compulsion to see the law as a solution for social problems.”

Dr. Boyd began her career as an outreach worker in a harm reduction program whose primary goal was to reunite mothers with their children, and she is concerned that the laws and policies currently in place are actually detrimental to the well-being of families.

“I am worried that mandatory minimum sentencing for drug crimes will have a terrible impact on women as well as limiting a judge’s ability to have discretion in sentencing.”

The Safer Streets and Communities Act (SSCA) is a bill that was brought forth by the Conservative government, passing in March of 2012. One of the amendments to the criminal code it has implemented is increased penalties for drug crimes.

An April 2013 report from the BC Provincial Health Officer expressed concerns that the SSCA would unfairly impact Aboriginal people who are already overrepresented in the prison system. Similarly, a March 2013 report from Correctional Investigator Howard Sapers argued that there has been an insufficient response from Ottawa to the Aboriginal incarceration rate.

The prohibition of drugs directly impacts mothers and children with 82 per cent of federally sentenced women and 90 per cent of federally sentenced Aboriginal women having experienced physical and/or sexual abuse. Drug use, work in the sex trade, welfare fraud and stealing food are all survival strategies which are criminalized and contribute to a self-perpetuating cycle. Nearly 40 per cent of women in Canadian jails were separated from their own parents because of incarceration and now they are mothers raising the next generation, and 50 per cent of their teenage children have already been in youth custody.

The Creating Choices report of the Task Force on Federally Sentenced Women found countless times that the hardest thing on women was not the imprisonment itself, but separation from their children, says Sarra.

“One of the emotions that is profoundly important is the emotion of shame. When women have abandoned their children or had children taken away, there is enormous shame and guilt around that,” says Alison Granger-Brown, who is a PhD candidate working in the area of growth, development and healing for women in prison. “You cannot understand the life of the woman in prison if you don’t try to journey with them and understand some of what brings them into prison.”

Granger-Brown has taken that journey with many women including Mo Korchinski.

“I used to block out those feelings and tell people that I did not have kids,” recalls Korchinski, who had an abusive childhood and lived a life of addiction that eventually led to her losing custody of her children. “It wasn’t until I saw the babies inside the prison that I started to think of my own kids and start my healing.”

Korchinski was incarcerated at a time when the Mother and Baby Program was running at Alouette Correctional Centre for Women in Maple Ridge, BC.

“When I walked out of those gates I didn’t have anything to look forward to except to go back to my old life, because I didn’t have my kids. It is devastating not to know where your child is.”

After her release, Korchinski was reunited with her children, the younger of whom had been told she was dead. Today is she a proud grandmother, filmmaker and author who works to advocate for others through Women in2 Healing, a community-based research project.

“I get calls from women who are terrified inside. They are pregnant and worried about what will happen. No one wants to deliver a baby and then four hours later have to leave your child and be back in jail. It’s sadism. The conditions are inhumane, being in labour while you are handcuffed and shackled. There was one woman who was told her release would only be supported if she had an abortion.”

Korchinski dedicates herself to helping other women behind bars, adding, “Yes, politicians can dictate what happens in prison, but if the public knew what goes on, things would change. We don’t have to run things the way we are.”

Granger-Brown agrees, “Decisions are made by those who have social power, and fear is often what drives policy creation. I want to see value placed on the people who have lived experience; creating programming and settings where people can do the healing work they need to do.”

The Mother and Baby Program at Alouette ran successfully from 2005-2008. It was cancelled abruptly and it’s closing was protested by many including Mary Ellen Turpel-Lafond, BC’s representative for Children and Youth who highlighted a baby’s right to the enormous health benefits associated with breastfeeding and strong maternal attachment. Granger-Brown worked as a recreational therapist at Alouette and resigned after the new warden announced the closure of the program.

“I could not watch as they pulled apart everything that we knew was helpful”, said Granger-Brown.

There is currently a case before the BC Supreme Court, Inglis v. British Columbia (Minister of Public Safety), 2012 BCSC 1023, which seeks to establish that both mothers and infants have constitutional rights to remain together during the incarceration of the mothers in the provincial corrections system.

The pain of mother and child being separated is one understood universally. “My experience with incarcerated mothers and their children has been stories of pain, suffering and rejection,” explains Mary Kamau, who works in prison ministry and is Head of Nursing at the Presbyterian University of East Africa. Kamau travelled from Kenya to attend the Roundtable.

“There is a great need to change the current scenario in which the stigma attached to imprisoned mothers is highly traumatizing, especially to the children who most of the time are innocent and find themselves the victims of circumstances. Something needs to be done, and the time is now.” 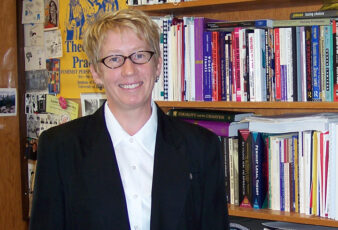