How did the COVID-19 pandemic amplify and expose global structures of inequity?

After British Columbia declared a COVID-19 State of Emergency on March 18, 2020, reports of anti-Asian violence in Vancouver increased by more than seven times the number of reported incidents during the same period last year.  The spike in these attacks accompanied a troubling discourse associating Asian bodies with contagion and speaks to a longer legacy of anti-Asian exclusion and racism in North America.

Dr. Danielle Wong organized a roundtable to address the racialized and racist narratives of the COVID-19 pandemic in relation to the transnational histories that connect Vancouver, and Canada more broadly, to Asia. Vancouver’s geopolitical relationship to Asia and the Pacific makes the city a unique site through which we can examine transpacific networks of capital, labour and biological contagion. Participants discussed existing and potential anti-racist policies for universities, cultural institutions and governments to address the structural vulnerabilities produced by the global pandemic.  A roundtable recording is available here.

Support from the Peter Wall Institute for Advanced Studies enabled speakers from Canada, the US and Hong Kong to participate, and extended the dialogue into other projects, including two commissioned art works by artists Young-Hae Chang Heavy Industries (YHCHI) —CHARLIE CHAN AND THE YELLOW PERIL and GUNS ‘N ASIANS–and a Forum on Race, Visuality and the Pandemic, essays from scholars and artists working in Canada, the US, and Asia.

In CHARLIE CHAN AND THE YELLOW PERIL, footage of an Italian-dubbed version of the 1939 film Charlie Chan in Honolulu is re-captioned by the YHCHI artists to narrate a comedic and irreverent story about a Chinese man crossing the Pacific with dreams of marrying a white woman in Vancouver, BC. The original Charlie Chan in Honolulu is a cinematic adaptation of one of Earl Derr Biggers’s detective novels, themselves infamous for producing Orientalist stereotypes.

In the film, Charlie Chan’s son, Jimmy, pretends to be his father and endeavours to solve a mystery aboard a freighter that has arrived in Honolulu from Shanghai. In the YHCHI piece, the linguistic and geographical mistranslations between dialogue, image, and text produce a reimagined space-time of the Pacific that brings together 19th century Chinese migration to British Columbia, the ongoing settler colonial histories of Hawai’i, and anti-Asian, xenophobic discourses that we see surfacing during this pandemic.

The Pacific becomes a palimpsest in YHCHI’s piece: Jimmy’s passage across these waters to an envisioned multiracial future in Canada is haunted, as the piece layers Hawai’i, Hong Kong, and Vancouver on top of one another—all three historically military and economic outposts of British and US empire, and sites of racial encounter and racial quarantine. The YHCHI plot invokes phrenology and eugenic thinking, as one of the white characters measures Jimmy’s head and makes comments about his hairlessness and virility.

CHARLIE CHAN AND THE YELLOW PERIL prompts us to consider how the COVID-19 pandemic’s discourses around racial contact might be illuminated by thinking about this moment outside of the exceptionality of the present, and instead as the resonances and dissonances of different, but connected, temporalities and routes. The artwork reimagines a past in order to confront the present, playfully and irreverently asking us to conceive of the desires and risks involved in racial touch, and the imperial violences that produce them. 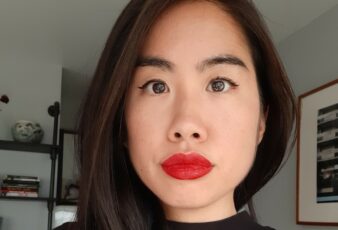