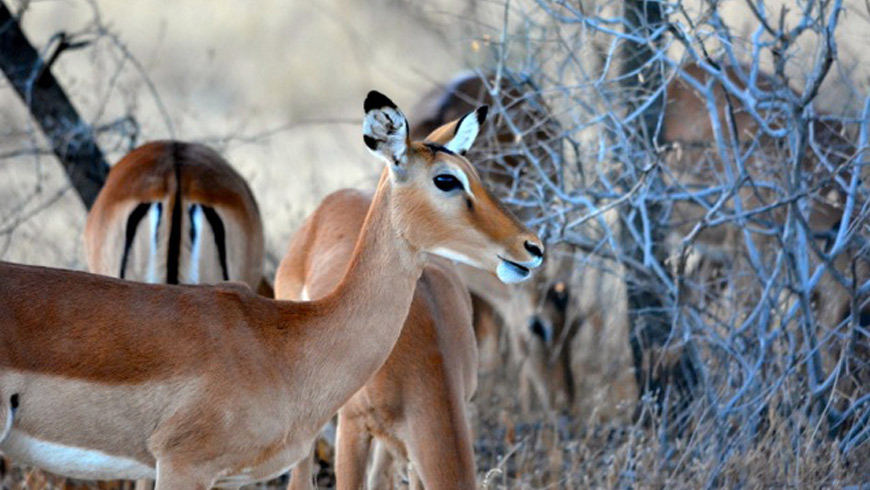 My excitement grew as I stood in the customs and immigration line in the Jomo Kenyatta International Airport in Nairobi, bleary-eyed from the long flight from Vancouver. After a wait, a serious looking custom official stamped my passport and suddenly, with a bright smile, said, “Welcome to Kenya.” It was May of 2013. This trip had been several months in the making and it had been almost a decade since I had last stepped foot in Africa.

I was thinking mainly about how fortunate I was to have the opportunity to be back on the continent. Earlier in the spring, I was awarded a Peter Wall Visiting Scholar Abroad award to travel to the Laikipia District in central Kenya, just north of the equator. There I would be spending several months collaborating with other ecologists who, like myself, were fascinated with how herbivores interact with plants to shape entire ecosystems. Yet, instead of the small arthropods that my lab typically studies, this research would include the charismatic vertebrate megafauna that East Africa is so famous for. 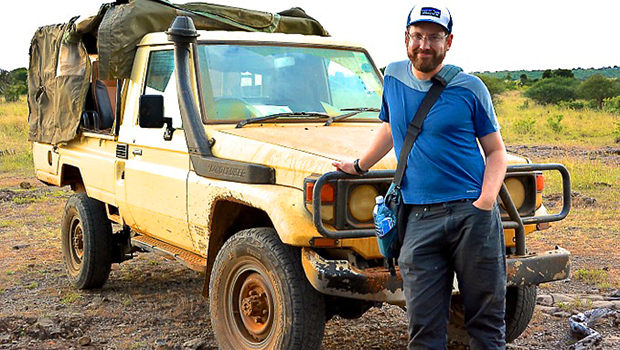 Dr. Gregory Crutsinger, Peter Wall Visiting Scholar Abroad awardee, about to head out in the field at the Mpala Research Centre in Kenya.

For the duration of the summer, I would be stationed at the Mpala Research Centre, named after the impala antelope that form large, bounding herds on the property. Mpala is a former colonial-era cattle ranch on the Laikipia plateau. It is part of a large consortium of commercial ranches and private conservancies in a 9,700 square kilometre area that is home to the greatest density and diversity of wildlife in East Africa outside of the renowned Serengeti-Mara ecosystem. Mpala is unique in that it is dedicated to academic research and has become the most well-known biological field station with some of the best infrastructure on the continent.

The property covers 49,100 acres of savannah and dry woodland habitats and is bordered by the Ewaso Ngiro and the Ewaso Narok rivers. It is home to 22 species of native large herbivores, the most common being elephants, zebra, impala, and dik-dik (a tiny antelope that stands ~ 30 cm at the shoulder). There is also a diverse carnivore community, including leopards, hyenas, wild dogs and the occasional lion. Rainfall drives much of the animal activity in the area, with the ‘long rains’ between April and June and the ‘short rains’ between October and December. The station lies within the rain shadow of Mt. Kenya, leading to a pronounced rainfall gradient across the property. Mean annual rainfall increases from ~440 mm per year in the north to 640 mm per year in the south. 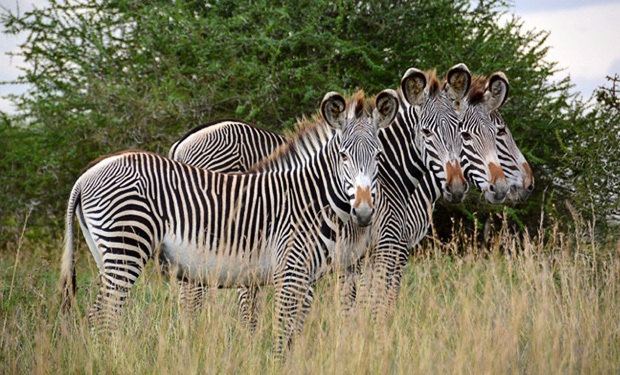 Large mammalian herbivores have long been known to be key players in East African ecosystems. This became obvious the first day I arrived at Mpala and stepped into the herbivore-adapted woodlands. Almost all plants are covered by spines and thorns to discourage being eaten. These thorns are thick enough to puncture Land Rover tires (everyone who works at the field station quickly becomes adept at changing flats), let alone uncovered human skin. To date, our understanding of the role of large herbivores in these ecosystems has been gained from a fairly coarse ‘all-or-nothing’ experimental approach, either fencing everything out or allowing all species into plots to browse and graze. Consequently, the relative importance of different sizes of mammals, from elephants to the tiny dik-diks, hasn’t been well studied. In addition, the climate of the region is changing. Mpala is currently seeing a shift in rainfall patterns resulting in longer, more severe dry periods coupled with periods of intense rain. In fact, the entire East African region was hit with one of its worst droughts in a century that ended the year before.

In 2008, several early-career lead researchers combined their funding to create a large-scale experiment that took advantage of the large herbivore community and the rainfall gradient at Mpala. Some of the best young minds in ecology, including Dr. Jake Goheen (University of Wyoming), Dr. Rob Pringle (Princeton), and Dr. Todd Palmer (University of Florida), constructed a series of size-selective large-herbivore exclosures across the natural rainfall gradient. This experiment (titled ‘UHURU’ for Ungulate Herbivory Under Rainfall uUcertainty) seeks to understand the effects of successively removing the largest size classes of herbivores from the system. It also evaluates how the direction and magnitude of herbivore effects are shaped by variation in precipitation regimes. 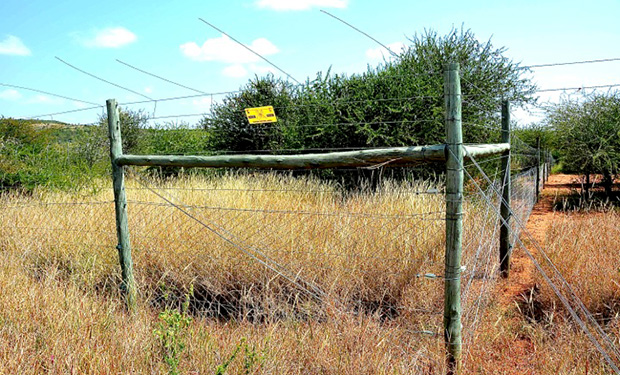 Electric fencing from one of the experimental exclosures of the UHURU (Ungulate Herbivory Under Rainfall Uncertainty) experiment.

As an assistant professor in the Department of Zoology at UBC, my lab typically works on the relationships between plant diversity and the diversity of animals, namely insects, that plants are hosts to. Given the importance of large herbivores in shaping plant diversity, collaborating with the designers of the UHURU experiment provided an ideal framework to explore the interactions between the vertebrate megafauna and the invertebrate microfauna on the Laikipia plateau. Although it is the megafauna that fills the pages of National Geographic magazine, the microfauna also play important roles in these ecosystems and have been far less studied than the big mammals. For example, many of the Acacia trees in the Mpala woodlands have mutualistic ants that specialize on living in their thorns and swarm out to discourage hungry mammals from foraging. Dung beetles quickly remove waste deposited by vertebrates and recycle it back into the ecosystems. Insects, such as grasshoppers, can be major herbivores of plants, sometimes rivaling the consumption of their vertebrate counterparts. I will acknowledge that insects aren’t going to attract the thousands of tourists on safaris in Kenya every year, but their ecological importance shouldn’t be underestimated.

The Visiting Scholar Abroad award allowed my PhD student, Matthew Barbour and Kenyan graduate student, Tobias Otieno, to take part in a mentorship program that benefits promising graduate students. Together with a field crew of Kenyan technicians that are responsible for regular data collection in UHURU, we spent the days trying to figure out how to sample insects within the plots. Initially, we tried using insect nets but these quickly became entangled in thorns. A better method ultimately was a gas-powered leaf blower that we modified the vacuum end of to suck up insects from plants while avoiding the thorns. We had to be worried about more than just thorns though, as there was always the possibility of encountering dangerous animals during fieldwork. Unlike the caterpillars I usually study, elephants or buffalo have the potential to kill a person and it can be a bit unnerving walking through the thick brush. The rule at Mpala is to never go into the field alone, so that someone can keep an eye out for animals while others collect data. 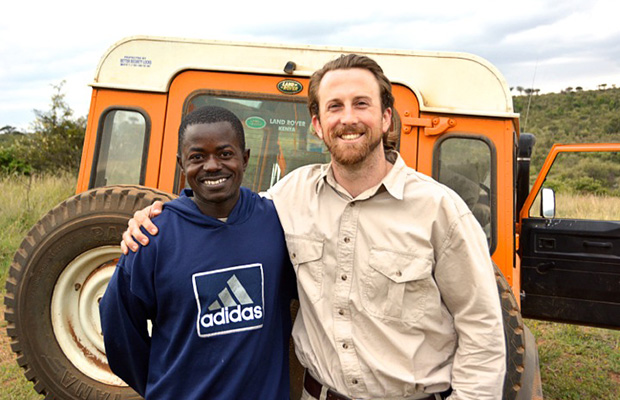 After long days in the field, there is a fantastic tradition of  ‘sundowners’ at the field station. A few of times a week, groups of researchers, students and technicians will pile in the back of dust-covered Land Cruisers or Land Rovers in the late afternoon. We would drive up to a favorite rocky outcrop with an amazing view over the landscape of the Laikipia plateau. As the sun sank over horizon and we chatted about the day’s research, there could be half a dozen giraffes with their long necks towering over the trees in the distance or a long line of elephants headed down the escarpment towards the river. The temperatures would cool down and the sky would light up with the bright oranges and reds of sunset. These moments reminded me of classic movie scenes from Out of Africa. It was easy to see what draws people back to Mpala year after year, in spite of the non-trivial expense and logistical challenges of working in Kenya.

It took several months to process all the samples and analyze the data from the UHURU experiment. As the results started to roll in, we not only found evidence that insect diversity responds directly to the rainfall gradient at Mpala, but that vertebrate herbivores may be indirectly affecting the microfauna through their influence on the availability and size of many host plants as well. We are currently writing up this manuscript for publication. While I still won’t admit that big mammals are more interesting than insects, I can say that our study is starting to peal back the layers on how macro and microfauna depend on one another in interesting ways.

Without the support of the Visiting Scholar Abroad Program, the unique opportunity for collaboration between my lab and the researchers at Mpala would never have occurred. Of course, I can’t wait to go back… but perhaps with some thicker field clothes this time. 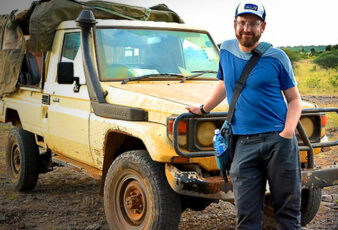