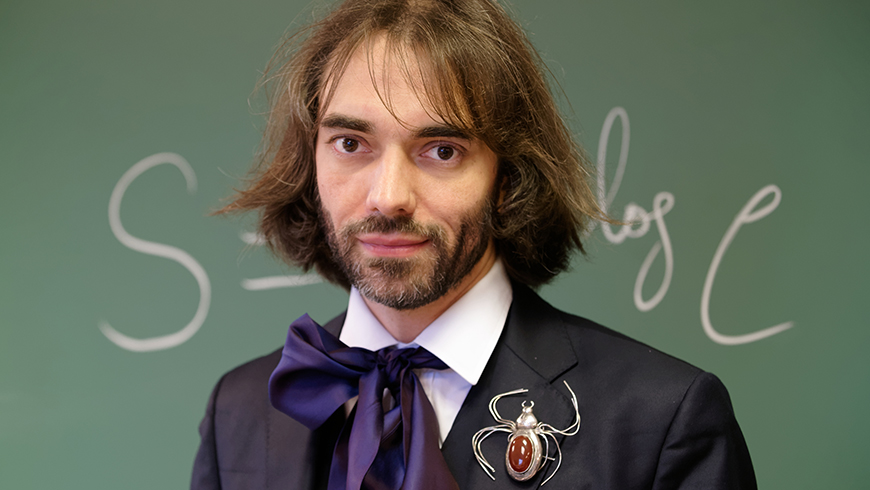 The first thing people notice about Cédric Villani is usually his looks. He dresses in a three-piece suit with a pocket watch on an Albert chain, a colourful cravat, and he invariably sports an elaborate spider broach on his chest, where others might wear a pocket protector.

This is the least interesting thing about Villani.

What really sets him apart from the majority of his colleagues is his ability—and desire—to translate the complexity and beauty of math to the general public.

“There’s so much want for it,” Villani says in his thick French accent, searching for the right word. “When there is a need, somebody has to fulfill the need.”

Asked if any of his colleagues appreciate what he does, he shoots back: “I hope so.”

Villani has the credentials to be an ambassador for the mathematical community. He’s the director of the Institut Henri Poincaré at the Pierre and Marie Curie University in Paris. In 2010, he won the Fields Medal, often described as the “Nobel Prize of mathematics,” which was created by the Canadian mathematician John Charles Fields to raise the stature of mathematics.

“It was a life-changing experiences, allowed me to focus at a critical point,” Villani says. He used the time to work with a collaborator to solve some key equations that led to his Fields medal. “It was critical in my career.”

But in his many lectures around the world, he doesn’t talk about partial differential equations or non-linear Landau damping—terms that might resonate for a handful of experts in the crowd. He talks about beauty. In fact, the title of Villani’s Spring 2017 Wall Exchange lecture at The Vogue Theatre on May 2nd in Vancouver is “The Hidden Beauty of Mathematics.”

Mathematics is an art

“Let me quote a mathematician named Paul Lockhart and his Mathematician’s Lament,” Villani says, referring to a high school teacher in Brooklyn who wrote a widely-read treatise on the need to change how math is taught. “In it he explains there is a big misunderstand between society and mathematics. The first thing to understand is that mathematics is an art. Every professional mathematician believes that math is an art. It’s about the beauty of reasoning, the meeting of ideas, the unexpected. That is what is beautiful in mathematics.”

“There is a famous quote by [the 19th century Russian mathematician] Sofia Kovalevskaya,” he says.  “True mathematics is re-creating reality that is different than the reality we live in… Any mathematician must have the heart of a poet.”

He then begins: “’Twas brillig, and the slithy toves. Did gyre and gimble in the wabe,” reciting the beginning of Jabberwocky, a nonsensical poem by the mathematician Charles Lutwidge Dodgson, who is better known by his pen name Lewis Carroll. “I think poetry at its best is playing of the word, everything is carefully computed and chosen.”

He then launches into a discussion of Aristotle, the ancient Greek philosopher who was also an influential early mathematician. “The ancient Greeks… said the most beautiful of thinking is mathematics because it is the meeting of pure ideas.”

The term mathematics itself has been distorted over the centuries. Its origin is in the ancient Greek word μάθημα (máthēma), which means “what is learned.” There were no numbers or equations necessarily associated with early “mathematics,” but rather a thoughtful analysis of the world and a teaching of those ideas.

The term “polymath” still has that quality, meaning someone who is widely learned, but has no specific connotation of mathematical ability. There are few polymaths left, Villani says, because of specialization. “The amount of knowledge and concepts has risen to the level where it is impossible. There is no such thing nowadays as a general mathematician.” Indeed, he says, the last person said to have mastered the whole of mathematics was the namesake of the institute he runs, Henri Poincaré, who died more than a century ago.

Cognitive science research has shown that doing math stimulates a different part of the brain than reading or other forms of study. “It is not the same areas of the brain used,” Villani says. “It requires a special way of thinking… If you don’t have the intuition, you won’t understand what it’s about.”

“The human brain is designed for “emotions, emotions, emotions. Rational thinking is something you have to work on and train for,” he continues. That is why in his lectures worldwide, Villani focuses on storytelling.

In addition to lecturing, Villani has written a bestselling book entitled Théorème Vivant, whose title translates from the French to “living theorem.” As he told Le Monde, for many people math is dead and immutable, but in reality it is perpetually evolving. “Ce titre, c’est une façon d’insister sur le caractère vivant des mathématiques.” (“This title is also a way of insisting on the living character of mathematics.”) The book has been translated into many languages, and was published in 2015 under the more mundane title Birth of a Theorem: A Mathematical Adventure.

If this wasn’t a busy enough schedule, Villani gives lectures in primary schools and prisons, and he spends three weeks a year in Africa, teaching and participating in various research institutions in French-speaking countries throughout the continent. “Science and progress is made for sharing,” he says. “More important than ever is the divide in the distribution of wealth, [but] also divide in distribution of knowledge. Otherwise tensions will rise.”

If he sounds a bit like a politician, it’s no surprise. Villani took an active role in the campaign of Anne Hidalgo when she successfully ran for mayor of Paris. “Some people are uncomfortable with scientists taking sides in politics issues,” he says. “I have been to 60, 65 countries around the world. I have much more international experience than the average politician. Also mathematicians are aware of collaboration.”

Villani has come out in vocal support of Emmanuel Macron, the current frontrunner for the French presidency. He has appeared on French news programs arguing that Macron’s centrist approach is necessary for reconciliation and for stability in Europe.

When asked if he would be willing to take a role in a Macron government, Villani gives an uncharacteristically sober and measured response. “Oh, it’s too early to say,” the mathematician says. “I don’t make calculations of this kind.”