In the Lower Mainland, the threat of a large subduction earthquake exists as a reminder of the massive scale and dynamism of our planet, as well as our potential vulnerabilities to such processes.

Distinguished Visiting Professor Barbara Romanowicz (Chair, Physics of the Earth’s interior at College de France) is a geophysicist and seismologist who examines the structure of the earth’s interior. Romanowicz, who is also a professor of geophysics at U.C. Berkeley, has also pioneered work in seismological monitoring, having worked to develop an earthquake alert system in Northern California.

We sat down with Romanowicz for a Q&A about her background, key issues in the field of geophysics and how it can inform our understanding of the world and help us prepare for earthquakes.

PWIAS: What made you decide to become a geophysicist, what drew you to the field?

Barbara Romanowicz: It happened a little bit by chance. I was interested more in astronomy when I was growing up, and then I went into pure mathematics just because I was good at it. But I wasn’t going to be at the top of the field. I walked through the corridor of the university and found an advertisement for a Master’s program in celestial mechanics.

The thing that drew me to it, which happens a lot in our field, is that they were advertising two weeks of field camp in the Pyrenees mountains, and I was a big mountain hiker. And then, because I was a mathematician, I was calculating these orbits, and these orbits are sensitive to the gravity field of planets, and gravity field reflects mass concentrations. And so that’s how I got into, sort of fell into, geophysics.

PWIAS: The phenomena that you study is quite epic in scale – both in terms of time and space, In order to utilize that information to mitigate or reduce vulnerability it needs to be translated into a much more immediate, human time scale. Do you see challenges inspiring engagement or action when there is such a huge discrepancy there?

Barbara Romanowicz: Exactly, very much so. Even if you don’t think in terms of millions of years, earthquake recurrence rates are hundreds of years. And memory is short – it is one generation, two generations maybe, and so keeping people interested in the problem when they haven’t lived through an earthquake or they don’t know anybody who has, it’s very difficult. It depends where you are – in Japan it’s not a problem, because they feel earthquakes all the time.

In Mexico, it’s not even a problem because they feel them sufficiently frequently, large earthquakes that at least scare them, if nothing else. They have an early warning system, where they have to get down from their buildings every time the siren goes. A lot of the times it is false alarms, but they don’t mind, they say “It’s a drill”. But if you did that in California, and I expect here, this would be a different issue, people would get really tired very quickly and then wouldn’t listen to them anymore.

PWIAS: For much of your career, at Berkeley and in France, you were involved with networking seismological monitoring systems, that work to warn [of imminent earthquakes]. Given all that we know about the dynamics of earthquakes, what is the best we can expect with respect to warning or prediction?

Barbara Romanowicz: Warning and prediction are completely different. Warning is ‘the earthquake is already happening’ and we can send the information faster than the earthquake waves can reach somewhere, so it depends on the distance from the earthquake epicentre. And that is improving, the methodologies are improving; [they are] mostly based on the differences in the velocities of the p-waves and the damaging shear waves. But in terms of prediction, there is no proven method at this time, and you never want to say never, but in the foreseeable future, its not likely to happen, just because we just don’t have any good precursory signals that are meaningful and reproduce-able.

PWIAS: In your opinion, where in the world are the best systems in place for warning for earthquakes?

Barbara Romanowicz: Well, Japan certainly, they are the leaders. They have been stopping the Shinkansen (the bullet train) for years now. It’s very well connected with the media, with industry, automatic shut off of different systems, all of this is very well connected.  There are efforts along the whole west coast of North America, up to here (although I’m not actually very familiar with what goes on here in British Columbia). The US Geological Survey and the universities have received a lot of funding to set up an early warning system, and it’s being tested in the Bay area, it’s been working for years on BART [Bay Area Rapid Transit system], although the public is not [that] aware. But that’s just as well, because the trains do stop sometimes when there is a small [earthquake], but its not frequent because there are not that many. Of course, Mexico; since 1985, when they had the large earthquakes. Its a different situation – they are far enough from where the great subduction zone earthquakes are happening, so Mexico City can get a lot of warning and its a very simple system, but it works very well.

PWIAS: In 2009, you were awarded the Inge Lehmann Medal, given for “outstanding contributions to the understanding of the structure, composition and dynamics of the Earth’s mantle and core.” You are the only woman to receive this award since its inception in 1997 – is that imbalance representative of challenges you have faced in your field at all?

Barbara Romanowicz: Our field, if you look at the population now, of graduate students, post-docs etcetera, it is more-or-less 50-50. But in my generation, I was the first woman on the faculty [in the department] at Berkeley, which changed, apparently, the character of the faculty meetings, very much. Of course I wasn’t there before so I can hardly compare. When I was a student, when I studied mathematics, [only 10 per cent of the student body was female], so I’m used to it. But it is changing, just that it is changing slowly in the sense of slow access to the higher-level kind of positions and things like distinctions. In the next decade, hopefully it will not be an issue at all anymore.

PWIAS: Are there any misconceptions about seismology or your field that are particularly pervasive?

Barbara Romanowicz: I think, in general, people maybe would rather not hear about earthquakes (laughs), because they mean negative things. And Earth Sciences, in general, is less attractive to the public than Astronomy, or thinking about the universe. Probably because that is more poetic, speaks more to imagination and where do we come from. Earth Science is opaque, it is under our feet, but it is opaque, we can’t see through, and that also means it connects directly to natural disasters. So I think that makes it the more darker kind of field. But it is fascinating, just to study why it’s so. And also relates to the history of the world. 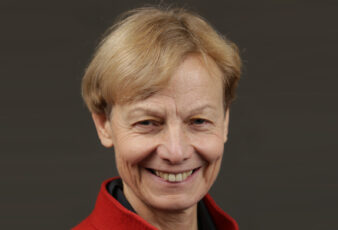