Typically, aneurysms show no symptoms and aren’t dangerous. However, at their most severe stage, some can rupture, leading to life-threatening conditions.

Malebogo Ngoepe, Iso Lomso Fellow and visiting scholar from the Stellenbosch Institute for Advanced Study (STIAS), is looking at this complex problem from a unique perspective. As a mechanical engineer, she is applying mathematical equations to create a new model to improve clinical intervention of aneurysms.

We sat down with Ngoepe for a Q&A about what made her interested in applying engineering techniques to body systems, how her new model may transform how we approach the treatment of aneurysms, and how diversity can broaden approaches to STEM fields, often leading to new solutions.

PWIAS: How would you describe your research to someone with limited knowledge of your expertise?

The mathematical and governing equations that I use to study the human body are quite different than someone coming from a biological or chemistry perspective. These equations are often used in traditional fields of engineering like studying water flows in rivers or flows of air around an airplane wing.

My expertise is applying these equations, along with biochemistry, to blood clotting in aneurysms. In some cases, the presence of a blood clot can accelerate the time for an aneurysm to rupture, while in others, it can stabilize the aneurysm and prevent rupture.

M.N.: I had reached the end of my undergraduate career and realized I didn’t want to apply my understanding of mechanics to traditional settings. I started asking myself, how could I apply it to the body? I started working on a variety of projects but eventually, I reached this problem of aneurysms.

It’s a field that is of interest to engineers because aneurysms are basically a breaking of the vessel wall where the normal vessel or artery gets quite weak and forms a balloon. It can be looked at from a variety of engineer problems. It’s a structural problem because there is a weakening in the vessel wall, but also the likelihood of the balloon rupturing can be determined by the local fluid conditions.

PWIAS: You are currently working on a model which can be applied to both cerebral aneurysms and abdominal aortic aneurysms. How will this model be useful and what kind of information can it provide?

M.N.: In the past, many people lived with an aneurysm on their brain, but most aneurysms would go unnoticed throughout their lifetime. This is largely due to aneurysms not presenting symptoms. We have made so many advances in medical technology that clinicians can now find aneurysms when patients come in for other conditions. But if a patient presents an aneurysm in a clinic, there is still a large question on whether to treat it or not.

The model I am co-developing with my colleagues is something that could be used for interventional planning. My team and I are trying to create a model that can predict whether an aneurysm balloon will rupture based on blood clotting outcomes. The model provides a nuanced approach that will give more information to practitioners on whether they should intervene or not, as well as provide a better understanding of the process at play during blood clotting formation.

PWIAS: What was the most rewarding aspect of being a visiting scholar at the Peter Wall Institute?

MN: I found many of the talks and lunches that I attended very enriching. For example, Wall Scholar Sara Milstein brought a guest, Bruce Wells from the University of Texas, who was talking about the study of biblical texts. He explained that rather than taking a local context view of the biblical text, he is trying to implement a systematic approach by comparing other literature written at the time.

I use a similar system boundaries approach in another aspect of my research where I study the scientific variations between different hair types. To hear a similar approach applied to such a widely different context, and to have these continuous moments of listening to other scholars’ work who come from completely different fields, helped me delve more deeply into the philosophical underpinnings of what it is we are all trying to achieve.

We often have this very strict dichotomy of natural sciences and the humanities. But if you look at a lot of philosophical shifts happening in those spaces, there are so many common themes and approaches that frequently emerge.

Additionally, there is nothing quite as beneficial as explaining my own work to someone who isn’t in my field. When we talk within our own field there are certain assumptions that we assume are laid in stone. Sometimes people ask questions that they think are basic but they prod the very fundamental assumptions and force you to rethink exactly what you are doing.

PWIAS: How will your time at the Peter Wall Institute influence extend beyond your residency?

M.N.: I will be returning to the University of British Columbia this summer to teach at Diversity in Math, a summer school program organized by Wall Scholar Malabika Pramanik [who Malebogo met at the Peter Wall Institute]. The series of workshops brings together young female students in STEM. It provides them an opportunity to get a sense of different career paths and discuss some of the challenges of diversity within the field of mathematics. We are working on an interesting exchange by bringing two of my students from South Africa to also come and present on their experiences. They support people in their own communities who are entering the field of engineering and come from backgrounds that haven’t traditionally been supported in that space.

I think representation is very important both in terms of how we imagine ourselves being able to move and shift in various spaces and how we view ourselves able to shape those spaces. For example, because I have an afro on my head, I know that different hair types are important to study because it has affected my way of moving through the world. Diversity allows us to shape and broaden our fields because when you have different people coming to the table, we all bring our own life experience. 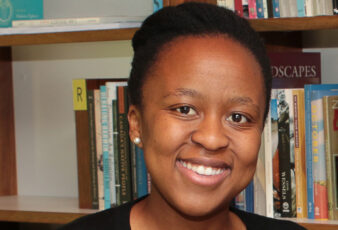