Organisms are already responding to our changing climate. Changes in the abundance and geographical distribution of many species have already been documented, and are predicted to intensify in the future, which may lead to extinction and contribute to the global biodiversity crisis. However, the scenarios forecasting biodiversity change in future climates rarely consider the different mechanisms of adaptation to environmental change.

Ophélie Ronce, International Visiting Research Scholar and CNRS Research Director at the University of Montpellier in France, is looking at this complex problem. As a scientist, she is applying mathematics and simulations to better understand and predict the capacity of species to adapt to climate change in the future.

We sat down with Ronce for a Q&A about her research, the complexity of adapting to a changing climate, and the importance of educating the public on how climate change has already impacted biodiversity.

PWIAS: How would you describe your research to someone with limited knowledge of your field?

Ophélie Ronce: I am interested in the impact of climate change on biodiversity and the different mechanisms [with] which species or populations can adapt to climate change. I am trying to understand if we can forecast biodiversity change in future climates; whether species have the ability to persist despite warmer climates, whether they will shift their range to adapt to new climates, or whether they will go extinct.

Generally, I am interested in evolution and how species evolve under different conditions. With my current project, I am reverting the time scale and focusing on the short term evolution of a lifespan rather than the long term. I am focusing on long-living organisms such as forest trees and whether they have the capacity to adapt to climate change. Climate change will happen within the lifespan of long-lived organisms. For some trees, their duration time is 100 years so their climate will be drastically different from when they are selected as seedlings compared to when they reach maturity. I want to understand the consequences of that. I am also looking at whether we can facilitate adaptation through different interventions and how this may interact with the lifespan of forests.

PWIAS: What made you interested in studying the interactions between evolutionary and demographic dynamics?

O.R.: Initially, I was interested in ecology, sort of the relationship and dynamics between animals, plants, and their environments. I didn’t want to do mathematics or modeling but rather wanted to be in the field and study organisms in nature. Through the exposure of different models, I became an evolutionary biologist but I always kept that initial interest for demographic dynamics.

If you want to conserve a species and prevent extinction, then you have to understand how evolution connects to its demography. The evolution of different species varies on why populations spread or retract certain spaces, or why they are in some places in the world and not others. Understanding those interactions between demographic dynamics and evolution can improve our understanding of how species will evolve and adapt as the climate rapidly changes.

PWIAS: What is the impact of species adapting to the changing environment?

O.R.: A significant impact of climate change has been changing dates in species life cycles, such as early blooming dates or early migration. This is a direct effect of warming temperature because temperature acts as a cue for species to predict when it is optimal for them to start a new stage in their cycle. For instance, some birds are known to advance the date at which they lay their eggs when the weather is warmer. Other forms of adaptation include some plant populations experiencing genetic changes granting better drought resistance, and many species have extended their range towards cooler regions to track the climate they are used to.

Species expanding their range towards the north could be considered an adaptation but some people may look at it as a direct impact of climate change. For example, mosquitos have expanded their range due to a warmer climate. From the point of view of the mosquito, this is a positive adaptation, but from the point of view of a human, this may be a negative effect of a warmer climate.

PWIAS: You have an upcoming event on May 5th, what will you be speaking about that day? What are you hoping the public learns from it?

O.R.: I will discuss different mechanisms and examples to demonstrate that climate change has already impacted biodiversity. I want to demonstrate how species adaptation to climate change is a complex problem that should be approached with caution. Adaptation varies on the species. Unfortunately, species that are already threatened are in a weaker position to adapt while many of the species humans would prefer to get rid of are often in the best position.

Scientists know there will be consequences as a result of climate change, but we are unsure of how these consequences will exactly play out. While we may not be in a position to confidently predict the future, it is important for the public to be aware of the uncertainties that lay ahead. Since we don’t fully understand how climate change is impacting adaptation, assuming that adaptation is or is not occurring is dangerous. These assumptions guide policy and have large consequences on how we approach nature and conservation.

PWIAS: What has been the most rewarding aspect of being a visiting scholar at the Peter Wall Institute?

O.R.: The opportunity to travel outside of France and come to the University of British Columbia has enabled me to meet and collaborate with international colleagues. Without the scholarship with the Peter Wall Institute, I wouldn’t have been able to come to UBC so I am extremely grateful.

Since I have been in residence at the Peter Wall Institute for an entire year, I recognize that this is a welcoming and supportive environment. Scholars listen to each other and embrace topics that are completely out of their area of expertise. Academia can be too narrow-minded. However, this interdisciplinary environment welcomes differences and it has been an extremely enriching experience.

The diverse disciplines of scholars at the Institute have exposed me to new social and political outlooks on the questions I am trying to answer. The Institute is opening my mind beyond a scientific or biological perspective.

Join Ophélie Ronce on May 5th for a public talk in which she will illustrate existing mechanisms of adaptation to climate change. 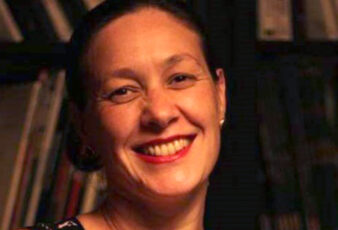