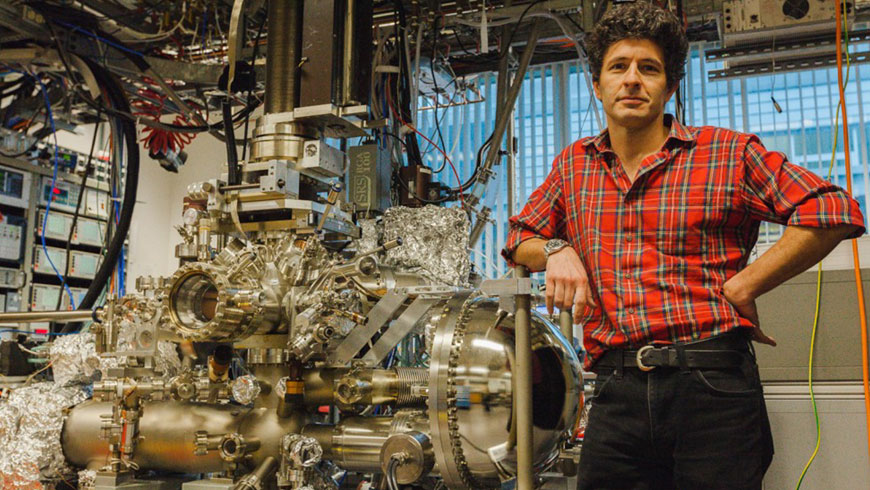 Researchers at UBC will be able to probe the mysteries of quantum materials with a new state-of-the-art ultrafast laser, thanks to a $1.4 million US grant from the Gordon and Betty Moore Foundation.

UBC physicists Andrea Damascelli and David Jones, along with Peter Wall International Visiting Research Scholar, Claudio Giannetti, will use the investment for a one-of-a-kind instrument. It combines a table-top laser that generates ultra-fast flashes of ultraviolet light with a photoelectron spectrometer, a state-of-the-art detector that can probe the motion of electrons in quantum materials.

The Gordon and Betty Moore Foundation Grant comes on the heels of a Peter Wall International Visiting Research award that allowed Damascelli and Jones to work with Italian physicist, Giannetti over three seperate visits to UBC in 2013, 2014 and 2015.

The goal of this research project was to develop a novel time‐resolved ARPES set‐up by merging the state‐of‐the‐art Angle Resolved Photoemission Spectroscopy (ARPES) at the Quantum Materials Laboratory of UBC and the advanced timeresolved optical spectroscopies (TROS), recently developed at the Università Cattolica del Sacro Cuore by Giannetti.

The instrument will generate femtosecond — one millionth of one billionth of a second (or 1/1,000,000,000,000,000 second) — snapshots of electrons moving inside a range of novel magnets, high-temperature superconductors, and other promising quantum materials.

“This combination of state-of-the-art technologies will enable us to conduct experiments that condensed matter physicists around the world have yearned to perform, but which have remained out of reach with existing instrumentation,” said Damascelli, a professor with the Department of Physics and Astronomy.

“In order to disentangle all relevant electronic interactions within these materials, we require extremely fine-grained measurements of their corresponding timescales.”

UBC is the first Canadian recipient under the Foundation’s Emergent Phenomena in Quantum Systems (EPiQS) Initiative.

More details about the Moore Foundation grant can be found here.