In the 1970’s, John Oliffe witnessed his grandfather dying from prostate cancer and saw the struggles he endured. It was a time when men didn’t talk about their vulnerabilities – he noticed that his grandfather never really spoke about the disease, let alone what he was feeling.

Fast forward to his career as a nurse, where he spent 20 years working in Emergency Departments, Oliffe noticed men coming into the hospital, exhibiting classic signs of a heart attack, but denying they had chest pain. He has since been occupied with men’s health issues in his academic career, examining the connections between an array of practices, illnesses and masculinities.

Oliffe is a UBC Nursing professor and 2014-2015 Wall Scholar who leads the Men’s Health Research Program at UBC. Last summer, he launched an innovative photo-voice outreach project on men’s suicide called Man Up Against Suicide, which was funded by Movember, a foundation committed to advancing the health of men. Along with colleagues, Oliffe has recently received an innovation grant from Movember, which will focus on using art therapy and producing a play featuring veterans returning from Afghanistan. The play will depict the challenges military men face around acclimatizing back into civilian life.

The project is still in initial stages, but in light of Movember, The Wall Papers recently caught up with Oliffe to ask him about his men’s health research program at UBC, and specifically, why focus on men’s health? 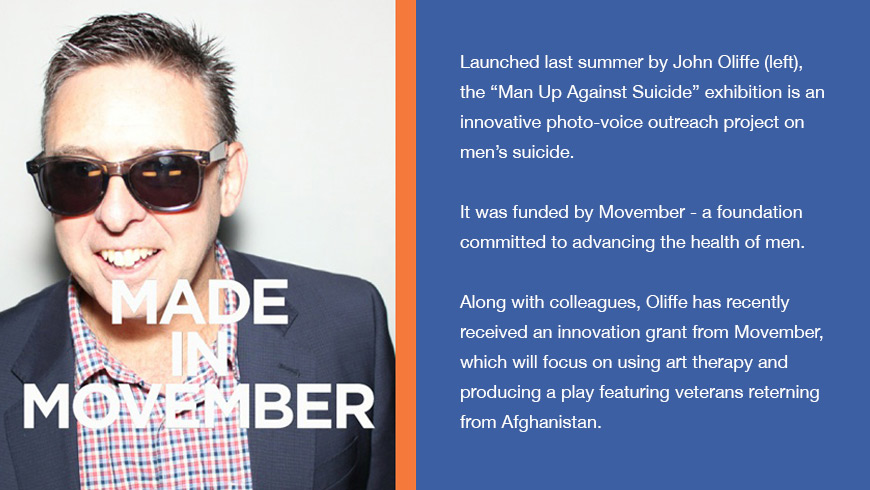 John Oliffe: I think that women’s health comes from a really important place. We did lots of health research on men and applied the findings to women. That was incredibly naïve. There is a specialty area in women’s health, which initially focused on female reproductive health. Men’s health comes from a different place – it argues that many men are actually disenfranchised by the structures that govern their health practices. Specifically, we know there are a lot of marginalized and poor men that battle significantly with health and access to services. A prime example of that in Canada is First Nations men – important disparities exist in the outcomes of that sub-group of men both in terms of morbidities and mortality rates.

So it was unfortunate that when men’s health was initially talked about the focus seemed to be on erectile dysfunction. In some ways it mirrored the issues that limited women’s health early on by focusing on what are basic sex or biological issues. Thankfully men’s health is sustaining because of the recognition that understanding masculinities or gender as well as biology are key to advancing the health of men – and those around them.

What the UBC men’s health program has been especially good at is gender relations research. For example, male suicide impacts family and friends – so this notion, that by doing men’s health we are somehow neglecting women’s health or family health, is short sighted. I would argue that every time we intervene to advance men’s health, the benefits can reach a lot of people beyond just men. Our research recognizes that there are issues that impact men’s health in diverse and different ways, and we are trying to better understand that as a means to addressing the problems we unearth.

WP: What about the focus on smoking cessation among Dads. Isn’t getting people to quit smoking passé?

JO: National smoking rates are still round 22 per cent overall. So smoking, and helping people quit is still an important issue. We got interested in smoking in pregnancy and the post-partum because we felt that dads’ smoking was important to address in that context. Historically, women had been the target of smoking cessation programs in pregnancy and the post-partum but we knew that the dad’s smoking influenced the smoking of their partner and the health of the child. So we have done over a decade of work with dads who smoke – developing print, face-to-face and online tobacco reduction and smoking cessation aids, like DadsInGear. We know that if dads can initiate a quit in pregnancy, they are far more likely to stay non-smokers than if they wait until after the child arrives.

WP: Given the Man Up Against Suicide exhibit held in Vancouver this past summer, it seems that you have really been focusing on the public outreach component of men’s depression and suicide. So why the need for public outreach?

JO: We first got interested in men’s depression because males are formally diagnosed at half the rate of women, but their suicide rate is 3-4 times that of women. Often times men exhibit irritability, aggression, substance overuse, over engagement in work and sports – and these can be cardinal signs of depression in men. However, generic screening tools for depression don’t typically include such items – so men experiencing depression can be missed or misdiagnosed. Men may also be challenged to access effective professional mental health care. Downstream, high male suicide rates reflect this also – and our research has recently focused on de-stigmatizing men’s depression as a means to thoughtfully consider avenues for male suicide prevention. Our work in men’s depression is available online.

The Man Up Against Suicide exhibit reaches out to de-stigmatize men’s depression and raise awareness of male suicide through photographs and captions contributed by people directly impacted by these issues. Specifically, the photos come from men and women who have lost a male to suicide, but also featured are photographs from men who have previously been challenged by suicidal thoughts. The photographs are not censored or sanitized and they are incredibly powerful not only in what they say but how they point toward the need for suicide prevention programs in Canada. The exhibit is touring Canada and is also available online– and was recently featured in a documentary. With Movember’s support, we are putting the issue of male suicide front and centre to solicit conversations, lobby for policy and reduce the number of lives lost to, and negatively impacted by, suicide.

WP: What do you hope to get out of your year at the Peter Wall Institute?

JO: I’ve really enjoyed meeting new people and being challenged to think outside my usual approaches and research topics. I expect to learn how I might apply an array of ‘new’ approaches and perspectives to my work – and ideally I might be able to share my expertise with others as well. I am enjoying some of the intellectual exchanges around issues that impact all the scholars. I have three deliverables in mind for my stay – but can’t say too much about those just yet. I am hoping they include some art and science based collaborations with some other ‘in residence’ folk at Peter Wall.