Imagine a farmer has an animal that is being raised for food – a cow, for example. One sunny morning on the farm, the farmer notices that Florence the dairy cow has become sick.

The farmer knows that giving antibiotics could improve the animal’s condition. He or she also knows that despite improving Florence’s health and welfare, those antibiotics could make their way from manure to the larger ecosystem, where widespread use of livestock antibiotics is contributing to the growth of antibiotic resistance in human populations.

What should the farmer do?

For Dr. Katharine Knowlton, an expert in the environmental impacts of animal agriculture and a recent Peter Wall Institute International Visiting Research Scholar at UBC, it's a pressing question with no straightforward answer.

"We know that when we dose with antibiotics, most of those antibiotics are excreted in the manure," explains Dr. Knowlton, who is a researcher in Virginia Polytechnic Institute and State University’s Department of Dairy Science. "[If] we land-apply manure as a fertilizer – an organic fertilizer – we're also land-applying the antibiotics in that manure."

"This is a real human health concern," Dr. Knowlton says, pointing to global worries over animal agriculture impact on the increase in antibiotic-resistant viruses and superbugs. 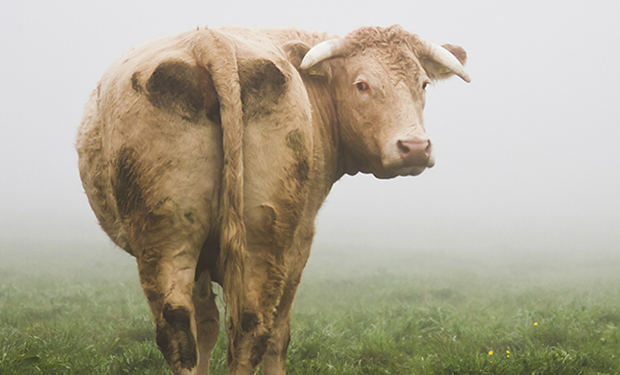 Neglecting to treat sick livestock is a serious animal welfare issue, but with an estimated 80 per cent of the world’s antibiotics used in livestock agriculture, growth of antibiotic resistance and risk to human health is a major concern.

However, the opposite side of the issue is that by simply not treating animals with antibiotics altogether, livestock are at risk of prolonged disease and worse chance of recovery, says Dr. Knowlton.

“If you've got sick cows, to withhold antibiotics is a real animal welfare concern,” says Dr. Knowlton, who is active in the dairy showing community as a coach and judge, and keeps her own herd of jersey cows on a friend’s New York farm.

It's competing interests like that which inspired Dr. Knowlton to join forces with Dr. Marina von Keyserlingk – alongside her research team within the Animal Welfare Program at UBC's Faculty of Land and Food Systems– to try to better understand how the general public feels about the contentious issue of therapeutic livestock antibiotics. Through the International Visiting Research Scholar Program, Dr. Knowlton was able to team up with Dr. von Keyserlingk– along with UBC Animal Welfare post-doctoral fellow Elisabeth Ormandy and grad student Erin Ryan– to get some answers.

The project surveyed more than 1,000 people using an online survey tool about the issue of transmission of antibiotics from animal agriculture to the wider food system, asking the same question posed about sick Florence the cow at the beginning of this article – to treat, or not to treat?

So far, Dr. Knowlton has analyzed around one third of the survey responses, and found that about 60 per cent of people believe the farmer should treat the sick cow because it is the ethical, humane thing to do. However, she notes that respondents make the distinction between favouring therapeutic use– treating only sick cows– and just feeding antibiotics to all cows on the basis of disease prevention (known as prophylactic use).

Around 10 per cent of respondents said they would prefer to let the cow die or be euthanized instead of treated, because it wasn't worth the risk to the environment and human population. 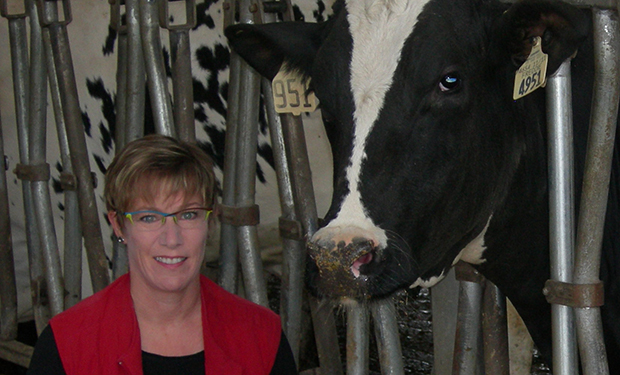 Alongside her research in dairy science, Dr. Knowlton keeps her own heard of jersey cows, and can often be found judging or coaching in the competitive dairy showing community.

For Dr. Knowlton, whose expertise lies in the natural sciences, it's the first chance she's had to get a sense of the opinions of the general public. She says she relishes the opportunity to explore bridging the natural and social sciences in a partnership with Dr. von Keyserlingk's team, who has seen success using the interdisciplinary approach to influence public policy in Canada, the US and Europe.

"Combining these social science tools with natural sciences is, I think, really powerful," she says, adding that these tools support her work, which is ultimately aimed at influencing new public policy on livestock antibiotic use.

“This kind of work is really making clear to our producer groups the strength of the opposition to prophylactic use of antibiotics.”

Even though limiting the spread of antibiotics present in livestock manure wasn't mentioned in any of the questions on the survey, so far results suggest that around 15 per cent of respondents are interested in techniques to control or degrade antibiotics after livestock manure is created.

"I love that reply because it's exactly what my research group back home is working on!" said Dr. Knowlton when discussing preliminary results via email.