Wall Stories
“When people are listening it allows you to unpack traumas that you might have been carrying for years and eventually you can begin to heal,” said William Greenland of the Gwich’in First Nation in the North West Territories. Greenland is an addictions counsellor and a community partner in the Wall Solutions Initiative Alcoholics Unanonymous.

By Ashley Nicholson and Marina Favaro

Substance abuse within Indigenous communities is often characterized as an “Aboriginal problem.” This perception minimizes the struggles of Canada’s First Nations people, perpetuates harmful stereotypes and prevents real conversations that could lead to solutions.

In the hopes of changing this problematic narrative, the Peter Wall Institute is supporting Alcoholics Unanonymous, a crowd-sourced, web-based platform on alcoholism in Indigenous communities that is being developed by the Global Reporting Centre (GRC) and the University of British Columbia’s Men’s Health Research program.

Funding is provided by the Wall Solutions Initiative which enables UBC faculty members to engage with community partners to develop innovative research solutions to issues of importance to society. Community partners in Canada’s Northwest Territories are taking part in the project’s development to create a digital platform where Indigenous community members will be able to share their experiences of alcohol abuse. The platform will also allow users to share music, artwork and videos.

William Greenland, from the Gwich’in First Nation, says this project has the power to open up the conversation and create a safe space for authentic dialogue.

“Sometimes it’s almost as though the guy next to you is telling your own story, because it’s so much the same,” Greenland explained.

Greenland began drinking at an early age and struggled with alcohol addiction for 33 years. He lived on the streets of Inuvik and Yellowknife, and was “in and out of a dozen different treatment centers.” He has been sober now for 12 years and currently works as a counsellor.

In the geographically isolated Canadian Arctic, Indigenous People face a history of colonization and trauma. The effects of alcohol dependency contribute to shocking rates of male depression and suicide—more than 10 times the national average in Inuit communities, accounting for 27 percent of all deaths.

“When there’s something wrong in our communities, when we feel alone, or hopeless, we turn to the booze. People run to the bottle to cover up their traumas and struggles. I know because I did the same,” said Greenland.

Studies have shown that building meaningful connections can be a path to recovery, something Greenland has personal experience with.

“When people are listening it allows you to unpack traumas that you might have been carrying for years and eventually you can begin to heal,” said Greenland.

Social isolation is a key problem facing First Nations people in Canada’s Arctic. The seclusion can lead to alcohol dependence, and those afflicted often retreat further into isolation creating a cycle that can be difficult to escape. Very little is currently being done to address this issue. There are few, if any, treatment centers in these regions, and prohibition efforts have largely failed.

“A problem that I frequently come across in my practice is a lack of support services,” Greenland said. “These are small communities and there’s nowhere for people to turn aside from friends and family, which heightens feelings of shame and stigma.”

Communities living in isolated areas that sometimes prove inaccessible could benefit from a support system that is not bound by geographical distance. Through the Alcoholics Unanonymous platform, community networks are able to span immense distances and connect digitally. Project team members also hope the experience and the material the participants produce will enrich the community.

“It's a really good example of working with a particular vulnerable sub-group of men and I think the value of that is to understand what works in their context,” explained Wall Associate Dr. John Oliffe, one of the project leads for Alcoholics Unanonymous. “I think it will be really interesting both in the way people will talk about their experiences and how they will probably rally around each other.” 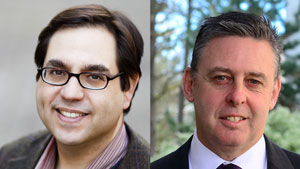 Prof. Peter Klein (left) is a co-creator of Alcoholics Unanonymous. Dr. John Oliffe (right) is one of the project leads on the Wall Solutions Initiative.

GRC Executive Director and Founder Peter Klein, a Wall Associate and professor at the UBC School of Journalism, co-created this project with the centre’s Deputy Director Britney Dennison, who also works at the UBC Men’s Health Research program.

“This project is a great example of cross-disciplinary collaboration, bringing the best from the nursing and public health disciplines, and merging them with deep, respectful storytelling,” said Prof. Klein.

With this project, the GRC is challenging the traditional parachute journalism model, and instead focusing on a community-centric approach. Their role within Alcoholics Unanonymous establishes space for local stakeholders to play an active role in framing their own narratives.

“A web portal is an ideal platform for this kind of empowerment journalism,” said Prof. Klein. “Instead of a top-down approach, with outsiders coming in the communities to report their observations, the community members themselves are the reporters, using the website to connect with one another.”

After a pilot phase in the Canadian Arctic, Alcoholics Unanonymous plans to begin working with other First Nations communities across the country. The project is also supported by the Movember Foundation, which has enabled the GRC to expand the national focus of the Wall Institute’s Solutions award by exploring this issue in Australia as well, offering participants across continents to connect and share their stories with one another.