Bracing for the fire storm

Wall Stories
Prime Minister Justin Trudeau and Alberta Premier Rachel Notley survey the damage in Fort McMurray after a wildfire tore through the town in May 2016. Photo: Chris Schwarz/Government of Alberta.

The small township of Anzac near Fort McMurray, established by Australian and New Zealand soldiers during the First World War, is a curious historical coupling between Australia and northern Alberta. But there is far more consequential linkage: major wildfires that threatened cities.

This year Tasmanian is marking the 50th anniversary of the destructive 1967 Black Tuesday bushfire, which killed 64 people, left 900 injured, and destroyed 1,400 homes. There was a very real chance that Hobart’s CBD could have been destroyed had the winds been slightly different. The trauma of that disaster still reverberates in the Tasmanian community.

There is a building risk of another 1967 event because climate change is resulting in worsening fire weather and more extreme fire events across Tasmania.

For this reason the recent fire in Fort McMurray in northern Alberta is of considerable interest to me. In May 2016 a geographically massive fire destroyed nearly 2,000 structures making it the most expensive natural disaster faced by the insurance industry in Canadian history, with total economic impact estimated to be $8.9 billion.

The fingerprints of climate change

Anomalously dry, hot and windy weather primed the forests to sustain a ferocious, and unpredictable fire. There is widespread agreement that the Fort McMurray fire bears the fingerprints of climate change given the fire was so early in the fire season, so intense and unpredictable.

This fire, which during its five-week rampage was known as ‘The Beast’, taught us some sobering lessons and highlighted the risks to cities in flammable landscapes like Hobart, and indeed Vancouver.

An extraordinary feature of the Fort McMurray fire was that there was no loss of human life with the tragic exception of two people killed during the mass evacuation when over 80,000 people fled the city. Whether such an exodus would be possible for other cities is debatable.

Fort McMurray has several advantages that allowed for an evacuation including a population that is fairly young, with a high level of familiarity with, and training in, emergency situations due to engagement with the hydrocarbon industry, the city’s primary employer. A simple, well-designed road network made for an unambiguous escape route. In most other cities there would likely be numerous traffic bottlenecks, in already stressed transport systems, making an orderly evacuation extraordinarily challenging, and probably impossible at short notice. 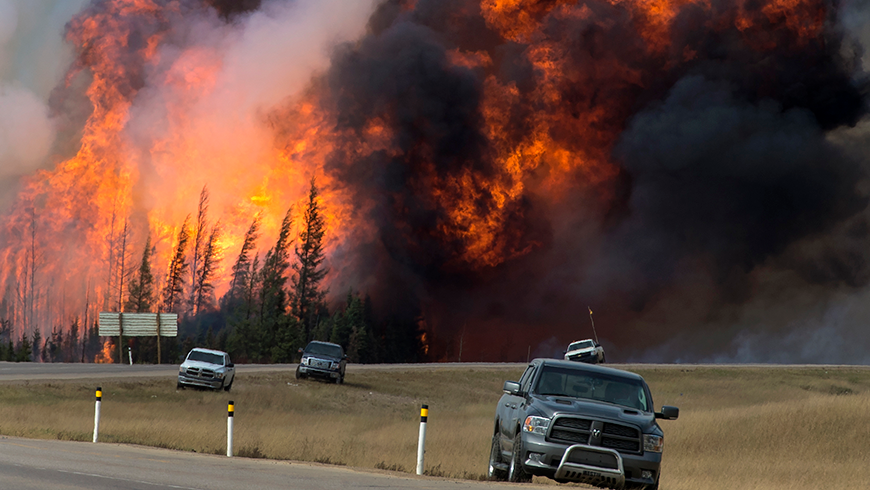 The "Beast", as it was called by Wood Buffalo fire chief Darby Allen, was a 1,500 square kilometre inferno that prompted the mass evacuation of nearly 90,000 people from Fort McMurray. Photo: Chris Schwarz/Government of Alberta.

In addition, Fort McMurray has well-planned, discrete suburbs that are clearly separated from the flammable forest, unlike many cities ringed with ‘wildland-urban interfaces’ that are heavily interdigitated with flammable vegetation. I was therefore shocked by the severe impacts of an ‘ember attack’ that triggered a cascade of house-to-house ignitions in Fort McMurray. Wildfires eject millions of small burning particles ahead of the fire front that can ignite structures by entering cavities or landing on combustible material. These embers can travel kilometers ahead of the fire front; indeed, the fire jumped across the Athabasca River that is over one km wide. Less well designed cities like Hobart and Vancouver have suburbs that are literally firetraps that could be set off by an ember storm.

Fire a wake up call

The Fort McMurray fire is a wake up call for all cities juxtaposed to flammable vegetation that is becoming more combustible under climate change. The likelihood of major fire disasters destroying a city is increasing globally. For this reason there must be serious community engagement with government programs, like Fire Smart, that can substantially reduce fire risk to communities through intensive fuels management to create barriers between urban and wildlands, investment in retrofitting buildings to guard against ember attack, and planning for evacuations and post fire recovery.

If we fail to act, future fire disasters in cities such as Hobart and Vancouver are likely to cause truly unimaginable social and economic harms.

David Bowman is Professor of Environmental Change Biology and the University of Tasmania and a Peter Wall Fellow at UBC. He is an internationally recognized authority of fire ecology and management.