Solutions to the conflicts between First Nations and the federal government over the control of fisheries are often elusive. On the foggy archipelago of Haida Gwaii on the North Coast of British Columbia, that may soon change, thanks to a Peter Wall Solutions project that combines ecological modelling with traditional Haida values.

The Collaborative Solutions for Haida Gwaii Herring Fisheries project aims to help resolve the dispute that flared up in 2014 when the government re-opened the herring fishery after a decade of closure. Despite that decision, the Council of the Haida Nation (CHN), the project’s community partner, has managed to keep the fishery closed, using legal means and negotiations with Fisheries and Oceans Canada (DFO), to promote herring recovery. As well as being a key species in the food web of Canada’s Pacific coast, herring have significant cultural value for coastal First Nations such as the Haida. Since time immemorial, the Haida have carried out a traditional spawn-on-kelp or k’aaw fishery.

By revealing the ecological impacts and community preferences of various Haida Gwaii herring fisheries management scenarios, the Solutions project aims to contribute to a sustainable and just Pacific herring fishery, one that respects not only the cultural values of the Haida, but also takes into account the needs of commercial fishermen and other stakeholders in the fishery. The research team, led by UBC researchers Dr. Mimi Lam, Dr. Tony Pitcher and Dr. Evgeny Pakhomov, predict that opening the herring fishery would compromise the recovery of herring, creating adverse ripple effects throughout the Haida Gwaii marine ecosystem and human communities. Under DFO’s existing fisheries management plan, Dr. Pitcher estimates that herring stocks have recovered by less than 40 percent since commercial fishing in the 1950s and 1960s depleted the stocks, with serious consequences for the traditional spawn-on-kelp fishery.

“Using a computer model developed in our NSERC Strategic Partnership Grant project, we can reproduce with reasonable accuracy what has happened in the northern B.C. ecosystem over the last 50 years,” says Dr. Pitcher. “The model actually recreates what happened so we can forecast what might happen in the future under different policies that could be in place.” The results of these models are being used in the Solutions project to explore with Haida Gwaii community members the ecological impacts of various herring fisheries management scenarios.

“This project offered a different way of looking at herring by looking at Haida values and how they can be used in the management of herring,” says Russ Jones, Director of the CHN’s Haida Oceans Technical Team. “In the traditional k’aaw fishery, we hand-pick the fronds of the giant kelp covered with herring spawn, usually at low tide.” 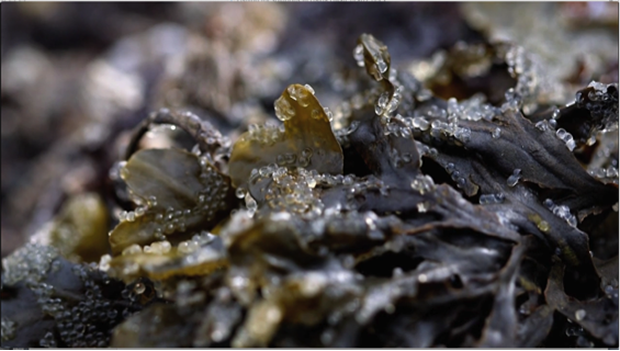 “We would like to spend more time talking about how the fishery should be managed,” Jones says. “There has been a political direction in the last few years to just go ahead and open fisheries and we don’t feel that is in the spirit of the agreements that are in place between the Haida Nation and the Government of Canada.”

There is, however, widespread optimism, both among the researchers and in Haida Gwaii, that things will improve under the Trudeau government, as the new Minister of Fisheries, Hunter Tootoo, announced last December that the commercial herring fishery around Haida Gwaii would remain closed this 2016 season. Consequently, focus has shifted away from conflicts protesting fishery re-openings to discussions of how herring should be managed.

An ecosystem- and values-based approach to fisheries management

To investigate the value of herring to the local communities, the research team partnered with renowned Haida artist April White to adapt a values-based approach developed by Norwegian colleague, Dr. Matthias Kaiser. Workshop participants and interviewees were asked to identify the impacts of the modeled fisheries scenarios on the economic, ecological and cultural dimensions of their community. They then chose their preferred scenario based on how each one resonated with their values. Notably, both Haida and non-Haida participants preferred herring fisheries management based on Haida values and an ecosystem approach.

Above: The commercial roe herring fishery could slow the recovery of the humpback whales that feed on herring as they pass through the waters around Haida Gwaii on their annual migration. Photo: Wen Davis. Below: ‘Hunger Games’ by April White used to depict, with the ecological modelling by the researchers, the predicted rebound of the Haida Gwaii marine ecosystem if the commercial roe herring fishery stays closed. 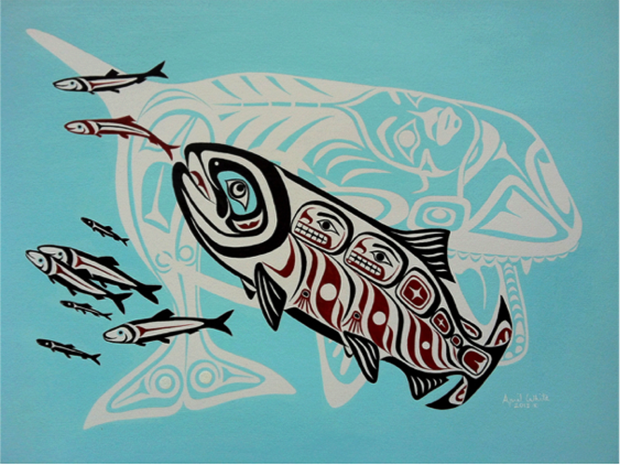 “What appealed to me about this project is how it combines art and science and values: it just all made sense for me of my experiences. I’m an artist, but I’ve also worked as a scientist and as a commercial fisherman in the northern waters. It is all part of my background, and in this project I get to explore all these aspects in order to communicate to others the importance of herring to me, to our ecosystems, and to our communities on Haida Gwaii," explains April White.

This ecosystem- and values-based approach favours the commercial spawn-on-kelp fishery, which has negligible impacts on the many species that depend on herring for their survival and benefits the Haida culturally by allowing the harvest of a traditional food source.

“Herring are forage fish which play an important ecosystem provisioning role within marine food webs, linking small plankton with larger consumers such as predatory fish, whales, and seabirds. This project exemplifies what we are hoping to achieve through our new Institute for the Oceans and Fisheries,” says its Director and project Co-PI, Dr. Evgeny Pakhomov: “cutting-edge interdisciplinary research, working with communities and policy-makers, to promote sustainable and equitable use of our marine resources.”

“Integral to our goal of seeking collaborative governance solutions for the herring fisheries of Haida Gwaii, we want to hold decision makers accountable to all citizens of Canada, the public owners of the fishery resources,” states Lam. “Towards that end, the Peter Wall Institute is hosting two public events, in Haida Gwaii and Vancouver, to discuss the findings of our Solutions project, Collaborative Solutions for Haida Gwaii Herring Fisheries." Community members who participated in the study are invited to the event at the Haida House in Tlell on April 16 to give feedback on our findings, while everyone is welcome to attend Soul Fish, a public event in Vancouver on May 1 at the Bill Reid Gallery that will coincide with a Peter Wall Roundtable on The ethical challenges of herring food webs and value chains.