Wall Stories
Distinguished Visiting Professor Edouard Bard’s objective is to understand the natural functioning of the ocean-atmosphere system on time scales ranging from a few decades to several million years.

Distinguished Visiting Professor Edouard Bard arrived at the Peter Wall Institute in September near the end of a summer when much of British Columbia was shrouded in wildfire smoke. When he sat down to talk with Wall Papers the conversation began with small talk about the weather, particularly the grey skies and pink sun overhead caused by the smoke. Edouard Bard is exceptionally well qualified to comment on matters of the atmosphere; his research lies at the interface of climatology, oceanography and geology. He holds the Professor Chair in Climate and Ocean Evolution at the Collège de France.

Despite the temptation to blame man-made climate change for the worst wildfire season on record, Prof. Bard cautions that it’s difficult to say if particular wildfires, and other recent events such as hurricanes, ocean acidification and ocean deoxygenation are natural or due to the enhanced greenhouse effect linked to human industries.

“The only way to know whether something is natural or the new norm due to man’s influence is by having reasonable knowledge of the past, notably the natural variability,” Bard states. “That is the key. In order to characterize trends in extreme events—hurricanes or floods for example—we need long time series on the order of several centuries.”

The conversation turned to art, specifically a landscape painting done in 1829 by English artist J.M.W. Turner depicting a bucolic countryside under a reddish sky. The painting has given scientists a window onto the atmosphere of the 17th century. Bard explains that the painting, “The Lake, Petworth”, was done after a volcano erupted in Indonesia, injecting volcanic aerosols into the stratosphere where they stayed for several years, affecting sunsets around the world. Such windows on the past lie at the heart of Bard’s research. It is necessary to have a long-term perspective in order to distinguish the respective impacts of geological, astronomical and anthropogenic forces. New technologies and analytical chemistry enable him and his team to reconstruct past climates using varied archives such as oceanic sediments, lake sediments, corals, stalagmites and polar ice. 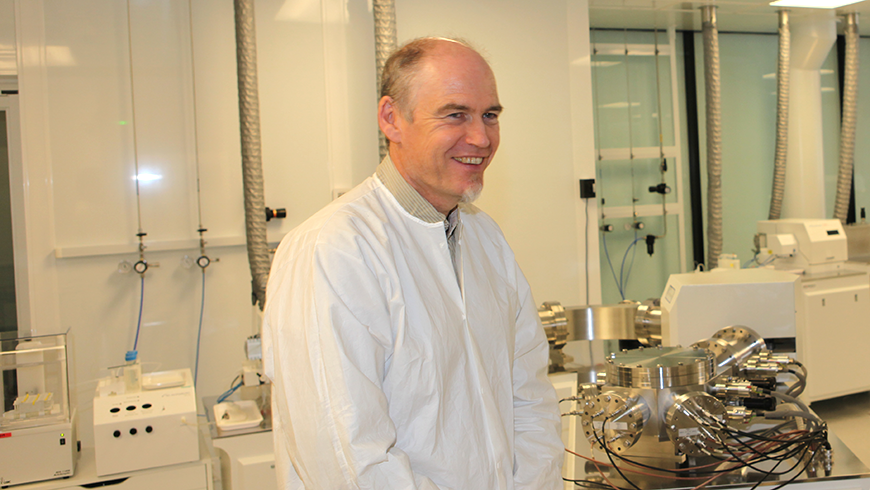 In order to go back into the past, Edouard Bard employs “time machines”—i.e. complex mass spectrometers to measure radioactive isotopes and thus date the climatic variations in polar ice and other archives. This photo shows Prof. Bard visiting the UBC EOAS Dept. Pacific Center for Isotopic and Geochemical Research.

Although Bard uses sophisticated instruments to study the deep past, he also keeps a foot in the present, using those same instruments to solve current societal problems. Learning from the past is essential when planning for the future, a maxim that is particularly true when considering the ongoing dialogue over climate change mitigation. Bard acknowledges that it’s difficult to communicate to politicians and the public that complete certainty is impossible when it comes to predicting how the climate will change. Policy makers want to know how to prepare for rising temperatures, sea levels, diminishing rainfall and intensified extreme climate events in order to budget sufficiently for mitigation to cover contingencies, yet they want to avoid spending too much and drawing criticism from voters. By way of an answer, Bard draws a parallel between climate change mitigation and engineering.

“When we talk to politicians we have to explain why it is not possible to predict climate change with extreme precision and 100 percent certainty. As for other complex problems, probabilistic projections can still be made,” Bard explains. “By applying the well-known laws of mechanics a civil engineer can predict very accurately the maximum load a bridge can sustain before collapsing. However, the building materials are not perfect and can’t be tested in an exhaustive manner. The engineer also relies on statistical assessments of the raw material to determine if a bridge is safe. This uncertainty is one of the reasons for applying safety factors in mechanical engineering. Climate change mitigation can thus be viewed as safety measures to avoid the worst-case scenarios. A good way to convince politicians is to point out the additional value that mitigation can provide. For instance, decreasing the dependence on fossil fuel to reduce the amount of CO2 in the atmosphere will also reduce air pollution, notably carbonaceous aerosols, that affect the health of people. It’s a win-win situation.” 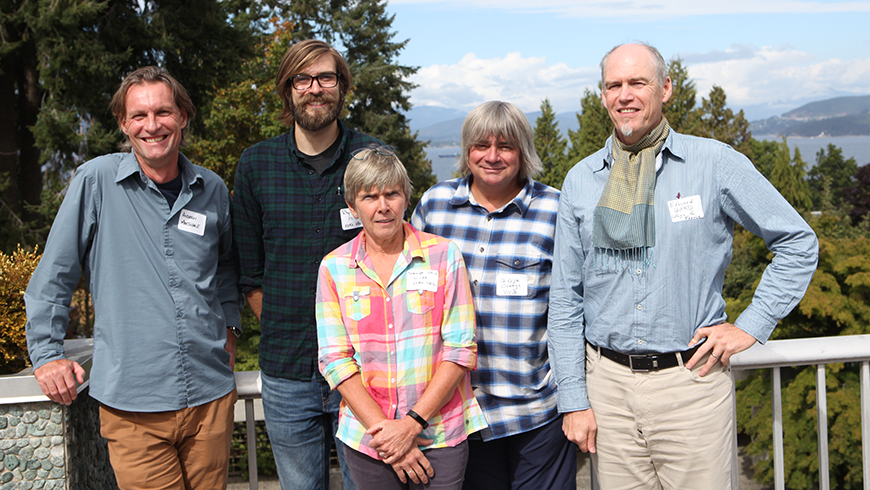 During his two weeks at the Peter Wall Institute, Bard took part in events that brought together UBC scientists from several fields. A paleoclimate symposium at the Institute brought together leading experts in geology, climatology, and archaeology to explore how the last ice age impacted Indigenous peoples of the west coast of North America. Left to right: Andrew Martindale, Rhy McMillan, Dominique Weis, Philippe Claeys and Edouard Bard.

When unravelling complex problems it is necessary to get the big picture while also paying close attention to the details. “If you study the climate you need to consider not only the atmosphere but other interacting systems such as the ocean, the biosphere on land and in oceans,” Bard says. “There is no way that one single person will embrace with competence all the fields, so for complex problems you need expertise from different parts of the scientific spectrum. The strength of the partnership between the Collège de France and the Peter Wall Institute stems from our shared commitment to interdisciplinary research and to communication among colleagues from different disciplines.”

During his stay in Vancouver, Edouard Bard participated to two symposia workshops which he helped organize.

The first one was focused on the earliest archaeological evidence in North America, in particular British Columbia, which is associated with the end of the last ice age. This event involved specialists of archeology, anthropology, climatology, Earth and planetary sciences who all learned a lot about the different perspectives provided by their colleagues. The lectures and workshop discussions identified several new avenues for collaborations, which hopefully will be made concrete in the future.

The second symposium was dedicated to ocean deoxygenation and its relationships with climate changes on various timescales. Here again, the working group involved scientists from various horizons including ocean chemists, physicists and biologists who study marine life from microbes to fishes. Their interest was not only focused on the present day ocean, but also its past and foreseeable future based on numerical models. The working group kept its momentum and is now busy organizing a collaboration focused on the North East Pacific, which can be viewed as a natural test-bench for studying the ocean deoxygenation.

“It will be a pleasure for me to come back to Vancouver as British Columbia is a key region in the world to study these important problems, and because I want to meet the best experts at the Peter Wall Institute,” Edouard Bard concludes.