Marrying medicine and meteorology: The impact of diesel pollution on human health

But when William Brune, a Peter Wall International Visiting Research scholar from Pennsylvania State University, arrived at UBC he didn’t come for the nice views or nature– he came for the pollution.

“I was at UBC because I have developed a system that can age diesel exhaust and was applying that to a project going on in the medical school,” says Brune, a professor of meteorology.

The project, spearheaded by Chris Carlsten from the Faculty of Medicine and School of Population and Public Health, studies the effects of atmospheric pollution on the human body using UBC's Air Pollution Exposure Lab (APEL).

It’s estimated that air pollution affects over hundreds of millions of people worldwide. Those who live in places with high levels of air pollution have a 20 per cent higher chance of dying from lung cancer according to studies from CancerCare.

But not all pollution is alike, which is where Brune’s research came in.

“The idea is try to make the diesel exhaust more like what occurs in the atmosphere rather than out of a generator,” says Brune. “Normally people are breathing exhaust in a city and the diesel has already gone into the atmosphere.”

The World Health Organization estimates 4.6 million people die each year from causes directly linked to air pollution, making it one of the top ten killers on earth. Air pollution has gotten so bad in some cities there are special names for related illnesses – such as the Beijing Cough. 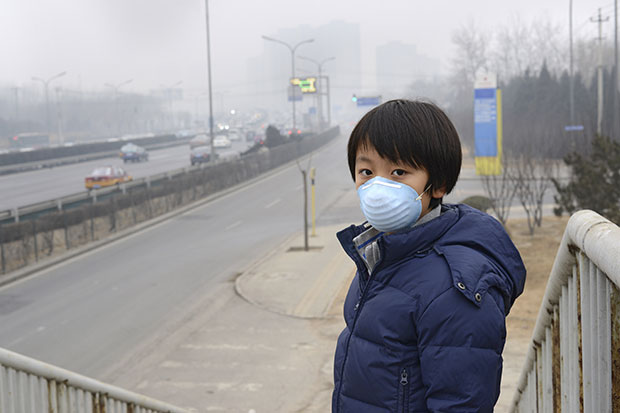 The World Health Organization estimates 4.6 million people die each year from causes directly linked to air pollution, making it one of the top ten killers on earth.

The challenge with Carlsten’s experiment is how to age the pollution to test the effects properly. It’s a process Brune has down to a science after developing his Potential Aerosol Mass (PAM) chamber system that can accelerate the aging time.

“So imagine a human being– we have very warm air inside of us and our tissues are very moist. So you can imagine when we breathe exhaust from the atmosphere it gets stuck, so to speak, in our bodies and we absorb a lot more.”

In a matter of minutes the PAM chamber can alter fresh diesel exhaust to have the properties of exhaust that’s been aging in the atmosphere for days or even weeks.

Carlsten’s test subjects- the only project in North America using human subjects- are then able to breathe in the exhaust and the team can better observe the biological effects aged pollution has on the person’s respiratory system.

The project offers an opportunity for the unique merging of two branches of science that don’t often get a chance to work in tandem: medicine and meteorology.

“This is a new direction for me and one I’m very excited about,” says Brune. “Atmospheric chemistry has been very disconnected from the medical side for a long time. This is starting to change and I’m very pleased to be in a fairly early group of people trying to make the connection between atmospheric chemistry and biology and air pollution.” 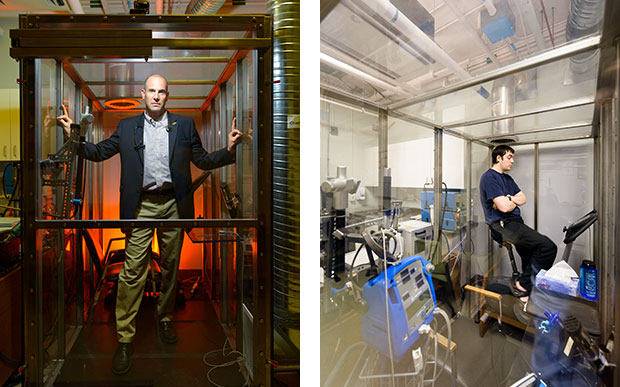 UBC's Air Pollution Exposure Laboratory (APEL) is the only lab in North America that uses human subjects to test the effects of air pollution on the respiratory system.

Through the Peter Wall Institute’s International Visiting Research Scholar program, Brune spent a month at UBC setting up PAM and running a few test experiments with Carlsten and his team. Professor Allan Bertram and his group in the Chemistry Department are also heavily involved in this research. Brune is now back at Pennylvania State and focused on his other research, but he is eager for the human tests to begin.

“I had a wonderful time at UBC and the Peter Wall Institute. I really enjoyed interacting with the research groups and with the other Wall scholars and I found it to be very stimulating and a new direction for me. It was great. And it got me thinking about some things I hadn’t been and gave me some great ideas about ways I can apply my research in the future.”

Carlsten’s project is slated to begin when funding is approved. The first tests using the APEL and PAM technologies together will be carried out immediately after.