Described as a hilarious, surprising and poignant love story about the way families are invented, Reproduction is not only Wall Scholar Ian Williams’ first novel, it is a literary feat that constantly “reproduces” itself as the plot moves forward.

Williams launched Reproduction, on Thursday, January 24 at the Vancouver Film School. The following is a portion of the Q&A conducted by Vancouver-based writer Aaron Rabinowitz during the launch. It has been edited for clarity and length.

Aaron Rabinowitz :  How would you describe Reproduction?

Ian Williams: At its most simple form it is a love story that starts off by chance. Felicia and Edgar meet in a hospital room, their mothers are dying, and they are forced to spend the night together waiting for their mothers to pass. They bond very quickly and the result of that is that they spend the next 40 years in and out of each other’s lives. We know those encounters, right? People that you know you like instantly, something subliminal passes between you. And the whole book just multiplies out of that very chance encounter.

A.R.: In the spirit of the book, I'm going to ask you the same question again. How would you describe Reproduction?

I.W.: I can describe it structurally. It's in four parts, the first part is biological and is divided into 23 paired chapters and sex talks between each of the parts. [In the second part] we move from two characters to four characters in 16 chapters. In the third part we move from 16 chapters to 256 chapters, that is 16 squared, so it just keeps getting bigger and bigger. And in the fourth part it just sweeps all that away and we get another form of reproduction. That is when the book gets cancer, it starts to reproduce unpredictably and generate itself.

A.R.: Edgar is a chain-smoking, womanizing, self-obsessed man who I don't think is very fond of his dying mother. And Felicia, the other main character, her idea of a good story usually involves a beheading. It goes back from his point of view to hers during the first section of the book. And I don't understand how this happened, but even though there are no jokes that they say between them, it is really funny. How does that happen?

I.W.: It probably shouldn't be funny, right? The circumstances are pretty dark that they are in. I don't know, this feels like the natural state of being. I could be both uncomfortable in this moment and really excited and enjoying this. I can hold those contradictory emotions in my body at the same time, and I feel like that is my voice. To be double. They're not wisecracking throughout the book, but it's inevitable.

A.R.: You spent years with these characters, can you tell us the amount of time it took you to write this book to the nearest minute?

I.W.: Rounding it up it was six years. The next one is going to be faster! 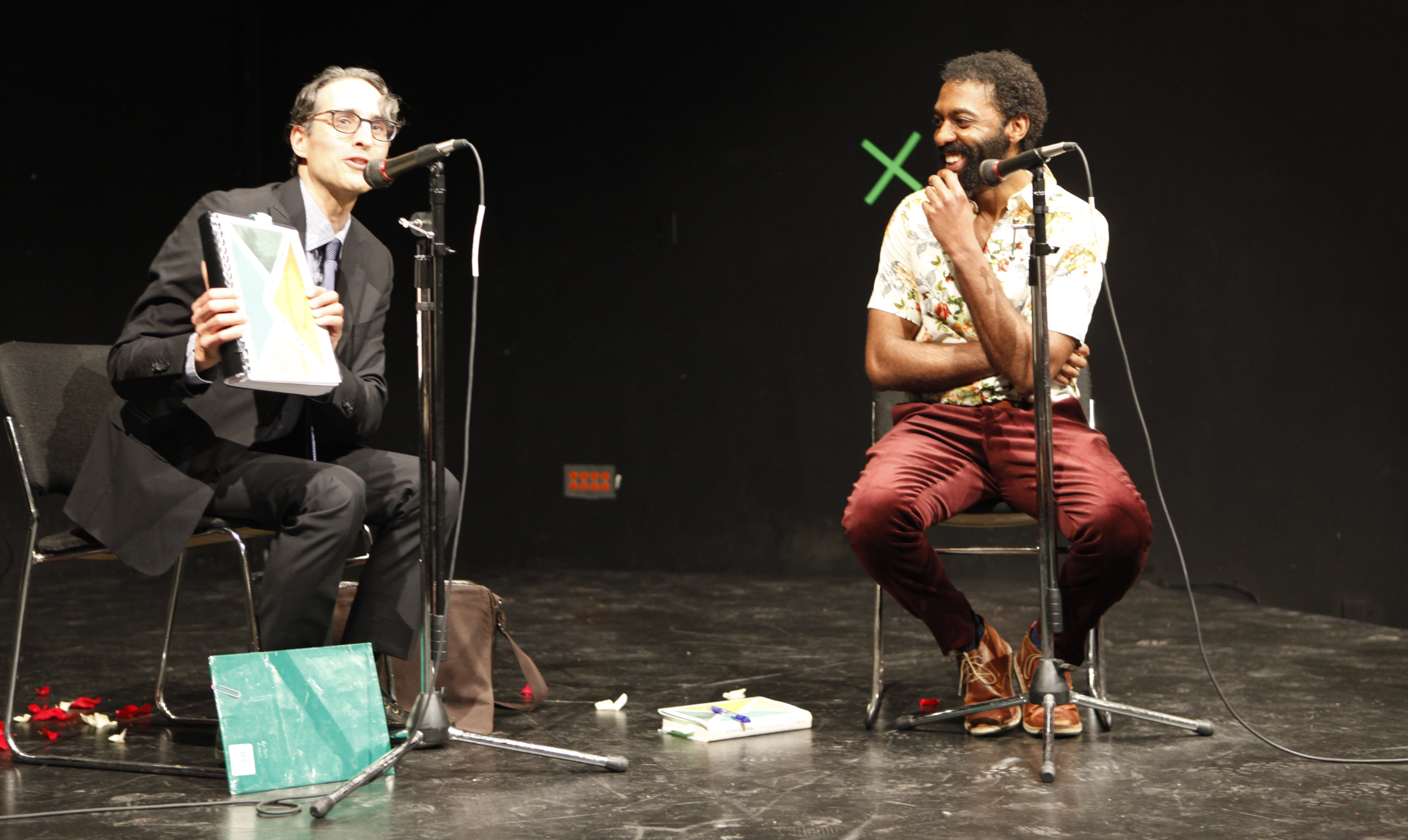 Pictured: Aaron Rabinowitz and Ian Williams at the Vancouver book launch of Reproduction

A.R.: One thing you mention in the acknowledgements is that this was six years of somewhat secretive writing, and that people would ask you about sharing your draft with them and you said no. So you just wrote it for six years and then sent it to your agent?

I.W.: Yeah. Maybe that is not a process I would recommend. But in this case, it was a method that I needed. I knew exactly what I wanted the book to do, although I didn't know how it was going to do that thing, so I had a way of knowing when it was done.

I feel like sometimes when we ask our friends and our colleagues for feedback, what we're really looking for is encouragement or praise. And I feel like the work was the work and I didn't really need to be encouraged, and I also don't like taking up people's time or space. And also, it's my space of privacy too.

A.R.: What do you do when you have characters whose life experiences don't match your own?

I.W.: No one's life experience lined up with mine. And that is for the best, otherwise you are writing memoir or something else. And that is not what I'm interested in. I just wanted it to be its own universe and its own world. A little bit of an escapist fantasy. But the negotiation between the real and the fictional is not a negotiation of my life and these characters lives, but just the world as I can conceive it believably. It's almost like asking, would a reader believe this? What is the least amount of truth I need to put into this for a reader to believe that?

I.W.: I generally like them all, I sympathize with them. But no one is spared. There are other kinds of novels where you can see people just love their characters too much and so they protect them and handle them with gloves. But nobody gets spared in this book. Everybody gets what's coming to them. They also get random coincidences, so it's not just the consequences of their behaviour, you just get stuff the universe throws at you.

A.R.: Your book also deals with the loss of birthright, can you expand on that?

I.W.: I would think about it in terms of displacement. There are people in the book who the land where they live or grew up might not be theirs, they are displaced or estranged from some other location. And Edgar's mother has a story that comes out only in the fine print at the end, but nobody in the novel can lay claim to the spaces that they're at. Everyone keeps asking Felicia where she's from and the whole book she does not tell you where. She refuses to let you have that.

A.R.: Is there something about this six-year journey that surprised you? Did a character do something that you were surprised by?

I.W.: I think they all did. No one ended up where they started off in my head, they all shifted around. But it's weird how after six years you can land in the very same spot that you were beforehand. What happens after all this Reproductionhoopla is you’ve still got the next book to work on, right? I don't want to romanticize the whole process, it's not all just celebration. This is the blip in the whole experience. The real experience and the real pleasure is the coffee shops, and looking out my window, and typing, and trying to figure stuff out.

Reproduction is currently available for purchase on Amazon.