The Peter Wall Institute for Advanced Studies (PWIAS) sat down with 2019 Wall Scholar Sima Godfrey (French, Hispanic and Italian Studies) to talk about the Crimean War and her research on why, despite thousands of deaths and inescapable coverage in the French press at the time, this war does not figure in French cultural memory.

PWIAS: How did you become interested in the Crimean War?

Sima Godfrey: It's completely accidental. I work on French literature and cultural history of the 19th century, and the decade I mostly focus on is the 1850s. At one point I was looking at the importance of fashion in 19th-century literature, and somebody asked me about the uniforms of Zouave soldiers in the Crimean war.

These were soldiers from Algeria who wore very folkloric uniforms with white pantaloons and a red vest over a shirt and high boots. I had to look up these uniforms, which I didn't know much about, although the term Zouave remained in use for a certain kind of white pant. I realized that I knew nothing about the Crimean War.

And then I saw the dates for it, basically 1853 to 1856, the period of time when a lot of the literature I was studying took place. My initial response was, “I'm very ignorant and haven't paid attention.” But then I started thinking, “well, wait a second, I read all this stuff that was written in 1854, 55, 56, and I've never seen any reference to it.”

My curiosity had to do with the fact that there was a relatively important European war in which the French played a leading role; it was the only war the French won in the 19th century, but it was a war in which they lost 100,000 men. And nobody was talking about it. 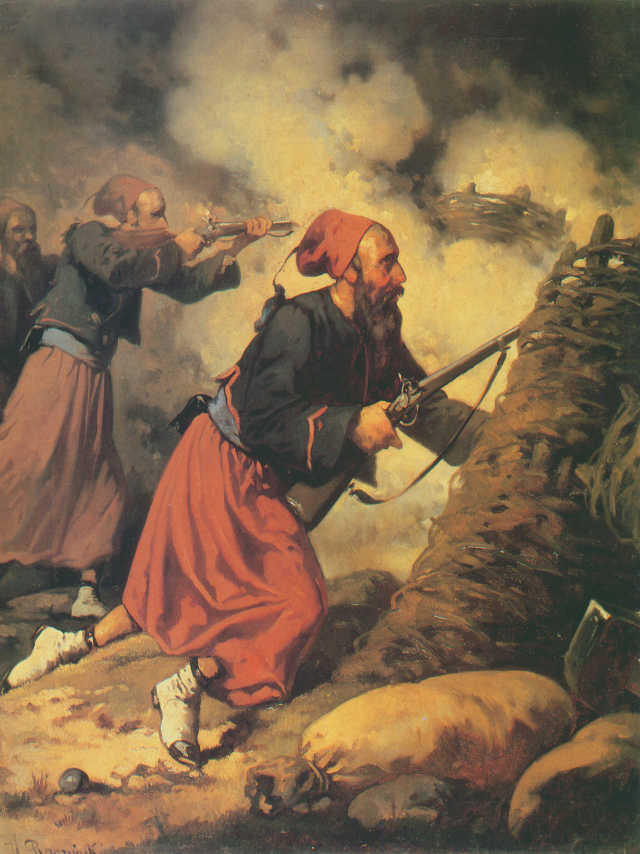 PWIAS: Can you explain what you mean when you say nobody was talking about it at the time?

SG: I should say it doesn't figure in French literature of the time, or for the next 50, 60 years and beyond. It was present in the press and aspects of it were represented in popular culture at the time. But it never made it into the pages of French literature, even though all of these authors clearly knew about it. It was in some of their correspondence. In one case there is reference to it in a memoir.

(Painting of Zouave soldier during the Crimean War)

PWIAS: Do you have any theories as to why?

SG: This is what everybody wants to know. There's the question about why in France. And that question comes from the fact that the Crimean War went instantly into British and Russian national mythology, but nowhere in the French.

And there are a variety of hypotheses I have. Both on the Russian side and on the British side, this was a war that was defined by scandal. What happened to the British was scandalous; incompetent leadership from an aristocratic officer corps with no military experience or training; the British didn't know how to deliver proper medicine or provisions; and it was reported on in the press. It actually brought down a government.

And, of course, there's "The Charge of the Light Brigade" by Alfred, Lord Tennyson, which was an immediate response to one of the scandals – an officer sending the light brigade straight into direct fire from the Russian army.

In Russia it was also a scandal. An ill prepared army that was composed largely of serfs who didn't have proper training, proper uniforms and so on. And eventually it was an important factor in the abolition of serfdom in Russia.

In France there was no scandal. The French knew how to deliver food and good medical care. Tactically, they did very well. They had a professional military corps with professionally trained officers. It was a tragedy because most of the soldiers died of illness, not battle wounds. But it wasn't scandalous. One of my hypotheses is that because there was no scandal attached to it to attract public outcry or outrage, it vanished.

PWIAS: What role does collective memory or, in this case, collective forgetting play?

SG: This is something I'm looking at somewhat hypothetically because there's been a lot of work done on collective memory and on cultural memory. And this is a case of collective or cultural forgetting. We know about many historical instances of forgetting, but they're usually related to repression. In this case, there was nothing to repress.

PWIAS: What role does literature play?

SG: That's an interesting question to look at because the Crimean war was largely memorialized by Tennyson. That poem was written several hours after he read the report in the London Times about this horrible event. And then you've got the stories of Florence Nightingale. There’s important work of literature that sealed it in Russia, like Tolstoy's Sevastopol Sketches.

And in France there's nothing equivalent. One of the issues here is the role that literature, but more generally art, paintings, drawings play in cementing the cultural memory of an event like that. So, one more hypothesis here is that because there doesn't seem to be that kind of cultural product that memorializes the war, it makes forgetting even more inevitable.

PWIAS: What role do statues or monuments play?

SG: If we look to Britain, there is a Crimean War monument that was built in Waterloo Place – right in the center of London. It's a very large monument. It has representations of British grenadiers at the bottom and a big plaque at the back.

In France, there are no such public monuments to the war. You have street names that were changed. There's an important bridge in Paris called the Pont de l'Alma, bridge of Alma. And if you were to ask most French people what historic event is associated with the bridge, the likely response would be the death of Princess Di.

I mentioned that the Crimean War monument in London was made from Russian cannons. In France there was a bishop that was raising funds to put up a statue of the Virgin Mary on top of one of the hills near his village, Le Puy-en-Velay. So, he went to Paris to see if the emperor would give them some funding to build this. And the emperor said if they won the war, he would give them Russian cannons to put up the statue.

Three days later, the French took Malakoff, and it was the end of the military part of the war. The bishop was convinced that it was his prayers that brought the resolution of the war. As promised, Napoleon gave him 400 Russian cannons, which were melted down to produce the largest statue at the time in France; an enormous statue of the Virgin Mary, sitting on top of this peak in Le Puy-en-Velay. It bears absolutely no reference whatsoever to the Crimean War. 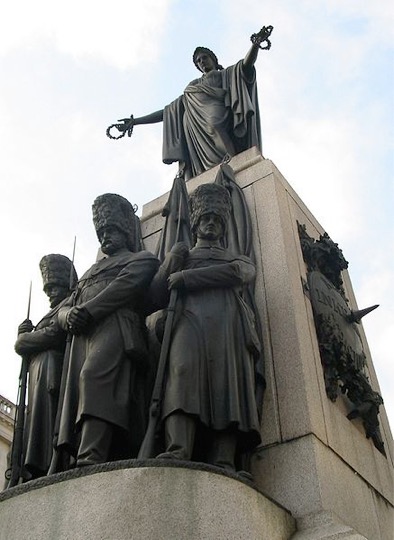 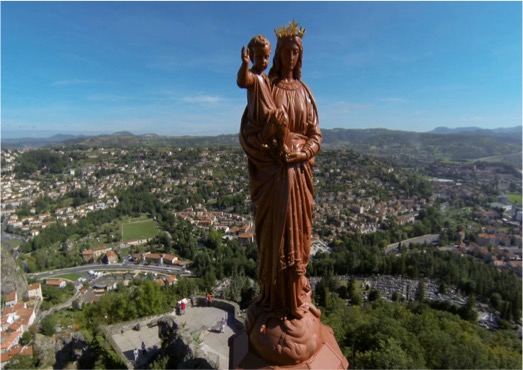 PWIAS: Why is it important to remember wars? What role do they play in national mythology?

SG: Different wars play different roles in the national mythology. The main reason to remember wars is to hopefully learn from them and, if possible, to avoid repeating them, although that doesn't seem to be the end result in too many cases. In the case of the Crimean war, it's out of respect for the many people who lost their lives.

Plus, it was a fairly extraordinary war. It was the first modern European war and, in many ways, the dry run for WWI. It was a trench war, and the first war that was photographed. It was also the first war that had a war correspondent on the battlefield. Media played a different role. There was more information that was available about it, and it was available on a daily basis. So the fact that it was forgotten and that it didn't make it into elite culture and literature makes it all the more curious.

PWIAS: Has being a Wall scholar at the Peter Wall Institute changed the way you’re approaching this research project?

SG: One other person here is working on questions of how history is remembered, Tara Mayer (2019 Wall Scholar; History). What it has highlighted for me, is the difference between memories that are shameful and repressed – as in the colonial legacy of Britain in Southeast Asia. Katherine Bowers (2019 Wall Scholar; Central Eastern Northern European Studies), who works on Russian literature, is a resource too. I'm doing most of my comparisons between France and Britain. But they were fighting Russia.

I have also been talking to Curtis Suttle (2019 Wall Scholar; Earth, Ocean & Atmospheric Sciences) and Brett Finlay (PWIAS Distinguished Professor; Biochemistry and Molecular Biology, and Microbiology and Immunology) because, as I said, most of the deaths on the allied side during the Crimean War were not from battle, they were from illnesses like cholera and typhus. And so that's one other possibility for the forgetting of it, that these were not heroic military deaths that you associate with great epic moments like the Napoleonic Wars.

These are some of the hypotheses that I've been playing with. And the more I read and to some extent, the more I talk to people, the more ideas start spinning. I never expected to be working on war. Nothing I ever did in the past dealt with it. And to some extent I think that's the principle that the Peter Wall Institute was based on, the idea that you bring together people who work on different things and you never know what's going to pop up.