Growing up near the ocean in Hong Kong, Dr. William Cheung was naturally drawn to questions about the health of the sea while he watched those around him enjoy its bounty. When his uncles and older friends gradually stopped fishing from the nearby bay as its fish and shellfish populations were depleted, his curiosity and concern were piqued.

“I had this worry that human activities are actually having major impacts on marine ecosystems and wildlife,” he recalls.

It was only later, with the help of fish biologist Dr. Yvonne Sadovy at the University of Hong Kong, that he was really able to delve into the answers to those questions over the course of his undergraduate training. He completed his PhD in Resource Management and Environmental Studies at the University of British Columbia (UBC) in 2007, but still considers Dr. Sadovy his mentor.

Recently, Dr. Cheung, a Peter Wall Institute Early Career Scholar for 2013-2014, recently had a chance to pass on the gift of mentorship. A colleague who works with foster children put Dr. Cheung in touch with a local girl in foster care with a burning interest in marine biology, but very little concept of what the discipline really was. The two spent a day together, talking about the science and exploring the Beaty Biodiversity Museum on the UBC campus.

“She seems to be still interested in marine biology after talking with me,” he laughs, relieved.

While, like most children, the girl may have been expecting a discipline packed with dolphin training and SCUBA diving, what Dr. Cheung deals with on a daily basis is much more sobering. As the effects of climate change manifest throughout the world, the oceans are seeing profound effects that are compounding the already serious human impacts like overfishing and habitat degradation.

The changes in physical ocean characteristics impact the creatures that live within it, affecting the populations, physiology and migration patterns of marine life. Those changes in turn affect life on land, from international relations all the way down to an individual’s ability to earn a living or feed themselves and their family. 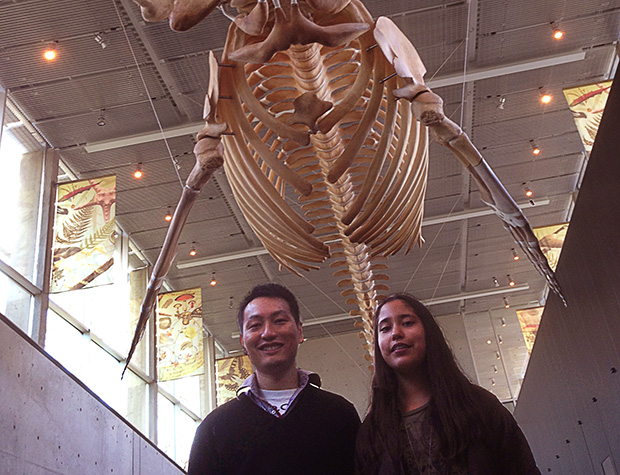 Dr. Cheung and his mentee during their exploration of UBC’s Beaty Biodiversity Museum.

This complex web of effects demands a complex response, which can only be undertaken by applying techniques and understanding from a variety of fields.

“When we try to understand the implications of climate change, we must also look at how the changes in the ecosystem will affect different aspects of society,” says Dr. Cheung.

At the moment, Dr. Cheung is building models to understand how fishing productivity will change over the next 50 years, and how that will then translate to affect communities on land. This means collaborating with economists and social scientists to get a wider, more interdisciplinary view.

The Peter Wall Institute for Advanced Studies provides Dr. Cheung and his colleagues with a platform to collaborate in this way. A colleague in his Early Career Scholar cohort at the Institute is a political scientist specializing in conflict, and being together at the Institute has provided the two researchers with the opportunity to talk through the overlap in their fields.

According to Dr. Cheung, they have found a gap in the literature where their disciplines meet: while most work on conflict related to climate change is focused on terrestrial changes and effects, there is work to be done on what the effects of climate change could mean for conflict over the ocean: this could be in the form of changing fish stocks, climate refugees, resource depletion, or contested resource discoveries – as well as the many other ripple effects yet to come as the oceans change.

“I haven't seen any specific analyses that focus on the ocean,” says Dr. Cheung.

Already there is evidence of international friction over the changes in the oceans. Atlantic mackerel stocks are just one example. The small fish are causing alarm in Europe as their populations shift unpredictably. It’s a major issue that can’t be addressed by marine biology alone.

“You are only limited by the boxes of the particular discipline you are already operating in,” says Dr. Cheung.