For Dr. C.W. Marshall, 2013-2014 Scholar in Residence at the Peter Wall Institute and UBC Professor of Ancient Performance Traditions and Greek Poetry, what started as a volunteer trip to Cambodia ended up changing the direction of his professional research.

Dr. Marshall, a scholar of ancient comedies, spent years researching and analyzing the performance and stagecraft of Greek and Latin plays from 500 BCE to AD 200, even directing some shows for modern audiences.

However, he returned home after a volunteer trip to Cambodia in 2008 with a whole new perspective on the genre of plays he had spent his career analyzing.

Marshall travelled to the small Southeast Asian country with a charity group to destroy a brothel in a small village notorious for selling young girls for sex. Facing a society that reflected a very common comedic plot device in ancient plays– sex trafficking– left Dr. Marshall questioning what made ancient plays that featured sex slavery humourous.

“One night (on that trip) I sat next to an international human rights lawyer at dinner,” Professor Marshall recalls. “She asked me what I did for a living, and when I described the ancient plays, she didn’t understand why they were funny."

In many ancient comedies, a large part of the plot derives from the relationship between slaves and their masters as well as men on a quest to buy a prostitute, leading to situations that– even to people today– can be mistaken for something quite harmless. 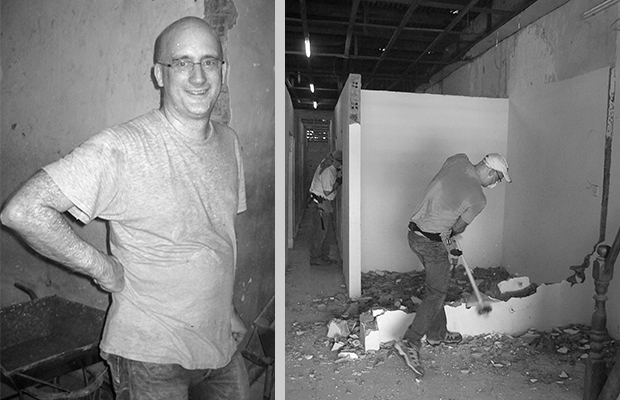 Dr. Marshall during his volunteer trip to Cambodia. He travelled with a charity group to destroy a brothel in a small village.

“A lot of these plays run on a very similar plot device,” Dr. Marshall explained. “Boy loves prostitute, boy can’t afford prostitute, boy has to trick someone– normally with the help of a slave– to get money for prostitute.”

“It’s very easy to assume that 'boy meets prostitute' is the same thing as 'boy meets girl', Marshall says. “These stories can be really funny for modern audiences– but the darker side of them is often overlooked.”

“As we start to look at the social realities of it, it’s not something that should be funny.”

It was upon his return from Cambodia that he began to question what such plots say not only about these plays, but also about ancient society in general that such humour can exist around such a dark element of society– one that is still alive and well today.

Dr. Marshall is currently writing a book that analyzes female sex slavery in Cambodia as a comparative model for sex slavery in ancient civilizations and their plays, examining why and how ancient audiences found these stories humourous– and what they say about the women whose real lives were reflected in these ancient characters.

Dr. Marshall said he hopes by using a modern example such as sex trafficking in Cambodia we can get a different view of the reality of being a slave in ancient Athens and further understand what it says about the society that these characters were on stage.

He credits his time on the ground in Cambodia with allowing this fresh perspective to come to light.

“It’s something that I’ve been carrying with me for the last few years now,” he says. “Cambodia has endured horrific things over the last number of decades, largely externally imposed. It has a horrific history of exploitation.”

“Using this modern day representation as a comparative model for ancient plays will, I’m sure, bring many questions to light about both societies [where sex slavery exists and existed].”