University of British Columbia researchers and members of Aboriginal groups have partnered to address water issues on BC reserves, and– if proven successful– some of their technology may be viable for small aboriginal communities across Canada.

The First Nations community of Boothroyd, nestled in BC's Fraser Canyon between Hope and Lytton, began to experience issues with water quality when a logging road was built in the area in 1994. At the time, the small community used surface water, but the new road caused bacterial contamination in their supply, says community Elder and Chief Rick Campbell.

The community met with Aboriginal Affairs and Northern Development Canada (AANDC) and an engineering company to build a well, which did for a time resolve their water problems. But the community of 39 homes has since grown, and is now in need of a larger water holding tank.

Campbell is an Elder advisor and the elected Chief of his community, who has partnered with UBC researcher Dr. Madjid Mohseni, industry partners and AANDC as part of an Aboriginal Water Health project, funded by the Peter Wall Institute Solutions Initiative. Through the project, Boothroyd, along with Lytton and Tl’azt’en bands, are collaborating with industry and research partners to implement practical solutions to water health issues in their communities.

“The relationship between UBC, the community and Aboriginal Affairs is very important. It gives the communities the opportunity to have an advocate to help express what the impacts on water have done to the communities,” says Chief Campbell.

For UBC’s Dr. Mohseni, a professor in the Department of Chemical and Biological Engineering, the most important part of the project is tailoring solutions to each individual community rather than applying a blanket approach.

"For me, the trust and building the relationship with the community was most important," says Dr. Mohseni, who serves as Principal Investigator for the Aboriginal Water Health initiative.

The Peter Wall Solutions Initiative was launched in 2011-12 to support UBC researchers working actively with community organizations, end-users and other partners to address current societal issues through innovative, interdisciplinary and academically rigorous research projects. The Institute has funded 11 such projects over three years.

In Boothroyd, Chief Campbell says the Solutions project has conducted water testing to determine what materials are best to use in designing and building the new water tank, and in assessing the microbial risk in community source water. These tests will help develop a long-term strategy to safeguard the community’s drinking water supply.

"In urban areas, we open the tap and it just comes," says Dr. Mohseni. "We never think about where it comes from, how it's cleaned and even don't think that there might be some kind of contamination in this water. It's a blessing for us, but many, many people in small and remote communities don’t have that luxury.”

“Every time they open the tap ... they always think, is this safe?"

He says that as a researcher, paid by taxpayers to make an impact, he sees the project an opportunity to make a real difference.

"I left or abandoned all other projects that I used to work on," explains Dr. Mohseni, who used to study wastewater electricity generation potential.

"I brought everything towards water." 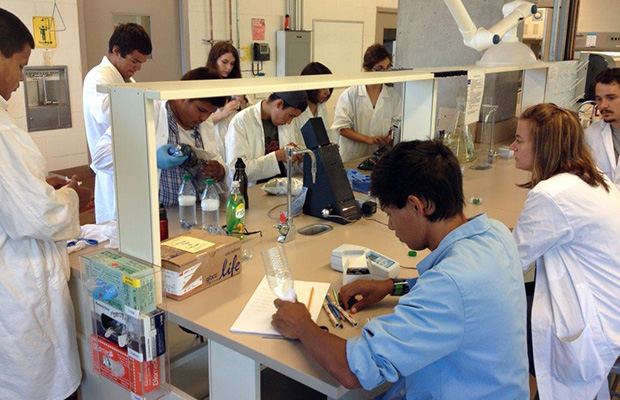 As part of the Aboriginal Water Health Solutions project, Aboriginal youth from partner communities participated in a Youth Water Leadership session at UBC.

According to Dr. Mohseni, the project’s strength is in partnering with communities who face a range of water challenges, from aged faulty water tanks to contaminated source water, to get a sense of what approaches may already be working.

"They can share with one another, and that's the best idea," he says.

In 2006, significant levels of rainfall caused an increase in water turbidity in the Lower Mainland, resulting in a boil water advisory for the city of Vancouver.

"Those river waters or creeks are susceptible to any kind of contamination, particularly microbiological contamination," Dr. Mohseni says. He adds that chlorine treatment is not completely affective in these cases, as bacteria and pathogens can take shelter in mud particles, and some microbes are resistant to chlorine all together. Additional filtration is needed.

To this end, the Aboriginal Water Health project has developed a novel small-scale water treatment system using VUV (Vacuum Ultra Violet) technology, which will be piloted in Middle River reserve (a small Tl’azt’en community). If proven, VUV may become a viable model for small aboriginal communities across BC and Canada.

Part of the Aboriginal Water Health project involves bringing First Nations communities, government groups and engineering companies at the same table during the consultation process. In the past, says Dr. Mohseni, communities have relied on an outside consultant to come up with a technical solution, which usually resulted in very sophisticated, expensive technologies local operators didn't have the capacity to maintain.

The advantages of working with a university are two-fold, he explains. Cost savings are huge– in the case of one of the solution project’s First Nation groups, UBC students were able to provide preliminary design work for free, something that he estimates could have cost the government tens of thousands of dollars through an industry contractor.

"The second advantage, which is really important, is that the community trusts universities a lot more, so the acceptability of that solution is a lot higher," says Dr. Mohseni.

The approach also serves as a practical learning opportunity for students.

"They learn all the best techniques, and technologies, and knowledge, and skills, and they forget the fact that things in the community, or on the ground, could be solved using very simple technology," says Dr. Mohseni.

"It doesn't have to be necessarily advanced, it could be very simple, but you need to engage the communities."